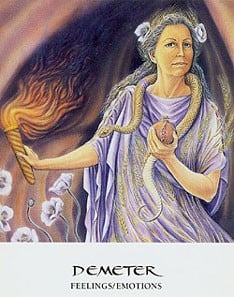 Ceres is the mother of Persephone

Once the flower like Persephone, the lovely daughter of earth, disappeared, her mother Demeter could find her nowhere. The weeping Demeter searched and searched through the fields, crying out for the daughter who was so close as to seem her very self, her childhood, her gentle youth.

Demeter fretfully clutched her blue green cloak, then thoughtlessly shredded it into tiny pieces, scattering them as cornflowers in the grasses. But flowers and grasses soon faded, for Demeter was the source of all growth. As she mourned, the goddess withdrew her energy from the plants, which began to wilt and shrivel.

So, it was said, Chloe (green one), the happy earth, changed for the first time into the yellow gold, autumnal Demeter.

The goddess wandered through the dying earth until she came to a town near Athens. There she took a job as nursemaid to the queen of Eleusis, Metanira, whose son Triptolemos she wanted to make immortal by smoking him like a log in the fireplace. The frantic queen found her, and the disguised goddess was revealed. Demeter stayed on in Eleusis, however, often sitting sadly by a well, as she wept for the loss of her beloved daughter.

One day the queen’s daughter Baubo (or lambe) saw the sad goddess at the well and tried to comfort her. Demeter refused all her consoling words and so, to make the goddess smile, Baubo exposed her vulva salaciously. Surprised, Demeter chuckled, the first laughter the starving earth had heard from its goddess in many months.

Shortly afterward, Persephone was restored to her mother, and spring bloomed again on the earth. In gratitude for the hospitality of the Eleusinians, Demeter taught the arts of agriculture to Prince Triptolemos and thereafter based her mysterious rites at that city.

This Greek story of the Great Goddess is clearly a seasonal metaphor; it contains as well a beautifully tender archetype of the bond between mothers and daughters.

A variant of the common Mediterranean myth that explains how the earth loves and consumes its own green growth, this legend is singular in epitomizing this love, not in a sexual relationship between the ever dying son and his mother, but in a familial bond between the maternal Demeter and her adored daughter Persephone.

This daughter, the springtime earth, was really only another form of Demeter herself. In Sicily, the identity of Demeter and Persephone was canonical; they were dubbed Damatres (‘mothers’) and were portrayed as indistinguishable. But the most common form of the Great Goddess was a trinity, rather than a pair of deities. Many scholars have sifted through the famous Demeter myths, hoping to find the third part of the feminine triad, the winter earth, the aged crone, the hibernating seed.

Speculation has generally settled on Hecate, who certainly seems to be the most crone like of the possible divine figures in the story. In addition, she appears at important junctures; she was, for instance, the only one to witness Persephone’s disappearance. Because the omniscient earth, Demeter, could hardly have been oblivious to happenings on her surface, Hecate therefore seems to be an aspect of Demeter as earth mother.

But earth mother is only one of the possible meanings of Demeter’s name. The second part of the word unarguably means mother. The first part, however, translates as easily into cereal as earth, making her the goddess not of the earth’s surface but only of cultivated, food-providing plants, parallel to the Roman Ceres.

If Damater derives from the words for earth mother, the goddess would be another form of Ge or Gaea. As such, she appears in some legends mated to Poseidon, the husband of Da.

Whether she symbolized all the earth or just its edible plants, Demeter was worshiped in fireless sacrifices, demanding all offerings in their natural state. Honeycombs, unspun wool, unpressed grapes, and uncooked grain were laid on her altars. Not for her the offerings of wine, mead, cakes, and cloth, for Demeter was the principle of natural, rather than artificial, production.

Her greatest festival, shared with Persephone, was at Eleusis, where the Greeks annually celebrated mysteries that brought the initiate into a gracious and grateful relationship to the Mother. At the three-day festival, the mystai imitated the searching Demeter and rejoiced as, once again, she was reunited with her daughter.

In their mimicry, they were at first Demeter Erynes (angry), furious and sad at the loss of Persephone; then they acted the happy role of Demeter Louisa (kindly one), the mother transformed by reunion. In other places and at other times, Demeter bore other names: Kidaria (mask), Chamaine (soil), and the powerful Thesmophoros (lawgiver), orderer of the seasons of the earth and of human life as well.