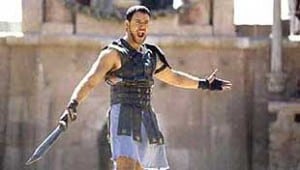 Mars is the archetype of our Inner Warrior

An archetype transcends the individual. In astrology they take the form of planets and their associated myths.

In the movie of the same name the Gladiator’s success as a general was due to his understanding of the rules of war. He had strategy, a plan, and commanded others well. This is the quality of Mars in Capricorn, where Mars is exalted.

Time to begin the Quest

If the Sun is our Inner Hero, Mars is our Inner Warrior. A healthy Mars gets us what we want. As the General, Mars is in service to the King – the Sun. The Sun is the spirit, the light that shines within us, the sign it is in describes the journey we are on in this life.

Mars combines to bring out the selfish, arrogant side of the Sun’s energy. In Vedic astrology Mars is known as a negative planetary type because it has pushy energy. It is therefore better when it isn’t overly strong.

However when Mars is disciplined – as a soldier is- and it joins the Sun, the soldier allies with the King. Mars helps us achieve our purpose. When this conjunction occurs (approx. every two years) it is a call for the Hero to go on the spiritual quest.

On April 18th 2013 Mars joins the Sun in the sign of Aries at 28 degrees. If you have any planet at that degree it is a powerful time for you to live your purpose. Aries is Mars’s own sign and is the Lone Warrior and the Pioneer.

The last conjunction Mars made with the Sun was on 5th February 2011 at 15 degrees of Aquarius -The Rebel, Outsider or Humantarian.

When Mars goes retrograde it stays in the same part of the sky for approx. 8 months. On 11th November 2011 it moved into the sign of Virgo and stayed there until 4th July 2012.

MARS ARCHETYPES THROUGH THE SIGNS

Hollywood is the modern day equivalent of Mount Olympus, home to the Greek gods. The stars play the role of modern gods. The list tells you where each film star has Mars in their charts. It gives a clue to their machismo. Do you recognise the archetypes in them or the parts they choose?

Mars in Taurus Tom Cruise The Sensual Lover, The Farmer, The Practical Consolidator

Mars in Libra Michael Douglas The Charmer, Don Juan, The Peacemaker, The Husband

Mars in Sagittarius John Travolta The Freedom lover, The Cowboy, The Philosopher, The Teacher

Mars in Aquarius Justin Bieber, Gerard Butler The Rebel, The Outsider, The Politician, The Team Player, The Humanitarian

Mars in Pisces Tom Hanks, Denzel Washington The Dreamer, The Drug Addict, The Artist/Poet/Musician, The Visionary.