Mercury retrograde gets a bad press, but it can offer us a shift in perspective.

Mercury goes retrograde 3 times a year and is well known as The Trickster playing havoc with communications.

Beforehand we are advised to back up our computers and delay buying a new phone/computer or signing contracts until Mercury moves direct again. Mercury is the fastest moving planet in our solar system, and information bombards us every day. In Mercury retrograde periods we are being asked to slow down and absorb the messages, to digest and take stock.

Mercury retrograde is an inward journey. Each year the retrogrades occur in the same element. This year Mercury retrogrades in the air signs where the planet of communication is most at home. We began with Aquarius in February, Gemini in June and now Libra in late September and October. 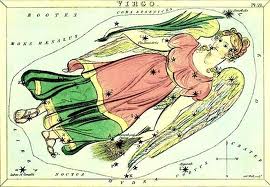 Not all Mercury retrograde periods are the same.

Mercury Retrograde in Libra focuses on relationships, on balance and finding your equilibrium, your centre. These are the qualities of Libra.

There is one extra special contact that it makes. On 3 separate days Mercury will be aligned with the fixed stars Spica and Arcturus. It is rare to have Mercury pass Spica and Arcturus three times. Spica is the brilliant star in the left hand of the Goddess holding the wheatsheaf in the constellation of Virgo.

The constellations are where the planets actually are. The signs of the tropical zodiac now differ from their original constellation by approx 23 degrees. Vedic astrology uses the actual constellations called the sidereal zodiac. In my consultations I use both to illuminate the spiritual connections offered by vedic astrology called Jyotish-The Science of Light.

Connect with Spica: The Potential for Brilliance

Mercury is soon to be with the Magical Behenian Stars Spica and Arcturus where Mercury stations retrograde on September 26/27 meaning Mercury is activating the magical powers of these stars for several weeks and providing us with an opportunity to perceive how we can connect the left and right brain, the masculine and feminine, the magical and mundane.

The Behenian fixed stars are a selection of fifteen stars considered especially useful for magical applications in the medieval astrology of Europe and the Arab world.

Their name derives from Arabic bahman, “root,” as each was considered a source of astrological power for one or more planets.

Each is also connected with a gemstone and plant that would be used in rituals meant to draw the star’s influence (e.g. into a talisman). When a planet was within six degrees of an associated star, this influence was thought to be particularly strong.

In this MasterClass discover:-