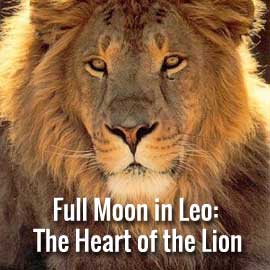 This Full Moon is in heart centered Leo.

Its a remarkable full moon as the Sun joins Jupiter in Aquarius, Venus joins Pluto in Capricorn and Mars is still close to Uranus and squares the Moon in Leo.

Mercury goes retrograde on Saturday 30th January in Aquarius until 21st February and the next New Moon on 11th February has 6 planets in Aquarius, so this is a taster of what is to come!

Leo is playful, a heart centered fire sign. In the Osho Zen tarot its the card called Queen of Fire and the concept is Sharing.

With all the negativity in the news, I welcome this energy to get creative.

One simple ritual is to light a candle to invoke the fire energy.

Or a more powerful ritual is when you write down all of your grievances or judgements on any person, institution, government or politician on a piece of paper and burn it on Thursday or Friday while the Moon is in Leo. This clears the path to feel more joy in your life.

“The Queen Of Fire is so rich, so much a queen, that she can afford to give. It doesn’t even occur to her to take inventories or to put something aside for later. She dispenses her treasures without limits, welcoming all and sundry to partake of the abundance, fertility and light that surrounds her.

There is no need to go anywhere or to make any special effort. You find that you can enjoy sensuality without possessiveness or attachment, can give birth to a child or to a new project with an equal sense of creativity fulfilled.

Everything around you seems to be “coming together” now. Enjoy it, ground yourself in it, and let the abundance in you and around you overflow.” Osho Zen tarot

The second major intense aspect at this Full Moon has Mars and Uranus in Taurus forming a channeling ‘T Square’ to the Moon in Leo and Saturn,  the Sun and Jupiter in Aquarius.

Uranus is unpredictable and Mars was exactly conjunct Uranus on Inauguration Day, January 20th. Uranus is a planet connected to revolution; Mars is the God of War.

Thank God that the inauguration of President Biden went off smoothly with a powerful feminine energy.

The Presidential Inaugural Committee planted more than 191,500 American flags on the National Mall, meant to represent the American people who can’t attend Biden’s inauguration due to COVID-19 and security threats. A true inspiration.

On a more personal level, Mars joining Uranus can be accident prone, or sudden flare ups with anger issues getting out of hand. Watch out for accidents as this energy is very ungrounding. It will start to ease by the New Moon in February. However by then we start the first of 3 squares of Saturn and Uranus, the theme of the year.

Mercury-what Messages will be delivered?

The month ahead now shows Mercury in Aquarius. It has moved past all the Capricorn planets. It begins the retrograde period from January 30th until 21st February. While retrograde it joins the Sun on 8th February and squares Mars on 10th February.

Now Jupiter and  Saturn are in the air sign of Aquarius I pray for more enlightened times. Aquarius is a fixed air sign so can be fixed in their mental attitude. However at its best it’s open minded and its cosmic mission is to promote community.

Do you have a planet in Aquarius? If so it will be activated this year by Jupiter. That’s Good!!!!

Sun in Aquarius from 19th January until 18th February when it moves into Pisces.

New Moon at 23 degrees Aquarius on 11th February at 19.05 GMT.  This is a real humdinger New Moon with 6 planets in Aquarius.

Mercury is now in Aquarius. It goes retrograde in Aquarius on 30th January until 21st February.

Venus is in Capricorn. It’s a Morning Star and joins Pluto on 28th at the Full Moon. It enters Aquarius on 1st February.

Mars is in Taurus next to Uranus. This is a sign ruled by Venus, so I pray there will be a softer approach to anger issues/getting needs met. Watch out for 10th February when Mercury retrograde joins Mars. Violence may flare up in the news concerning students and groups of young people.

Jupiter is now direct  It moved into Aquarius on 19th December for approx. 11 months. There is a brief period when it moves into Pisces on 13th May until 28th July as it retrogrades back into Aquarius.

Saturn is direct in Capricorn. It moved into Aquarius on 17th December. This ends two and a half years of Saturn in Capricorn so comes as a welcome relief for all Capricorns.

What does the future hold for you? Find out with this Very Special Offer: £30 for Personal Astrology Reports worth £45!

It’s a far better cosmic picture than 2020. There are some big astrological opportunities this year. Want divine guidance on when they happen, and what they mean for you?

The astrology of 2021 is an important year as Jupiter and Saturn are now in Aquarius. This means that they are no longer travelling with Pluto. The nodal axis which affects the eclipses, changed sign on June 5th in 2020 into Gemini North Node and Sagittarius South Node. They last for eighteen months before changing signs. This year is important for all Aquarians and those who have planets in Aquarius. Is that you?

The nodal axis connects us to the eclipses which are a wild card in astrology.

Your 3 Personal Astrology Reports for 2021

The 3 Personal Astrology 2021 Reports are worth £45 if bought separately. These reports are based on your date, time and place of birth.
NB. They are both calculated for the same person. Please note that Steven doesn’t include Chiron but it is included in Stephanie Johnson’s Report.

Each report called ‘Sky Log‘ gives you over 40 pages of in-depth predictions.  This report is usually sold as a 6 month report for £15. These reports are based on your transits and secondary progressions. The author Steven Forrest, has a great style and explains clearly and poetically – with no jargon – what the planetary transits signify for you.

This report is based on your transits and secondary progressions for the year ahead. There are three parts to the report:-

THE INVITATION: First, the big questions. In the part of the report called THE INVITATION, he gives you that “mountain-top” perspective that enables you to make sense of the details. Steven speaks in normal English- no jargon – and gives a real depth of understanding to the major planets affecting you in the year ahead.

THE DETAILS: These minor transits unfold quickly. It’s a rare week that doesn’t contain at least a few. A report that discussed them all in the kind of microscopic detail we’ve applied to the major events would be several inches thick. In order to cover the daily astrological kaleidoscope within the practical limitations of the space available, we’ve resorted to producing capsulized one-sentence nuggets that compress a lot of information into a few words. So, slow down, shift gears, and let them wash over you. Think of these images more as daily meditations than as the kind of full-blown explanations to which you’ve gotten accustomed in the previous sections of SKYLOG.

Steven writes:- Throughout the following text, I’ll be endeavoring to write in plain English, but if you’re unfamiliar with the jargon of astrology, you’ll encounter a few words that may require definition. A “transiting” planet, for example, refers to the actual, current position of that planet in the sky. Sometimes the transiting planets form critical geometric angles with the natal planets in the birthchart, triggering developmental questions in your life. These critical angles are called “aspects.”

The “progressed” planets function in much the same way as the transiting planets, but we approach them a little differently. They’re like a script that’s been built into your birthchart. Just as we know that an oak tree will emerge from an acorn and bring forth its leaves in season, similarly each person’s birthchart contains within it the seeds of certain predictable developmental stages. Progressions spell out those stages.

The next report written by Stephanie Johnson is approx. 20 pages and includes a full colour birth chart and easy bar graph reference for the year. It has just been updated with more information on each transit. The entries are sorted by the exact date on which each event occurs, with the planets involved.  She writes:-

“The astrological system of Transits is offering us much the same information as a weather forecast. It is giving us an indication of the emotional and intellectual weather of our lives. It is up to us to decide our own destiny.”

The Reports will be emailed to you as PDF files. They are best read on an iPad or computer.