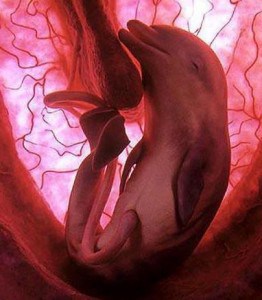 Confused? Lost at sea? There’s a massive overdose of emotion at this March New Moon in Pisces

There are now 7 planets in Pisces, a time to meditate, be by the sea or dive into a fantasy world. Pisces relates to the 12th house in astrology- the unseen, pre-birth and a place of rest and retreat from the world.

Neptune, the ruling planet is all about bliss. Hence my choice of illustration for this newsletter is this extraordinary picture of a dolphin in the womb.

However for those who have been experiencing an emotional difficult month, there is good news.

The day after the new moon the energy shifts as Mars moves into its own sign of Aries.

Mercury is still retrograde in Pisces until 17th March, which tends for being mentally vague, illogical and fuzzy. Once it moves forward it will be slow, so patience is a key theme this month until after the Sun moves into Aries on 20th.

Astrologer Jeff Jawer says “It’s like going to a country where you don’t speak the language.”

Pisces is the last sign, the least personal and connects us to the collective. This is what many call Christ consciousness.

It’s when our compassion extends to people that we’ve never met.

I saw the Movie ‘The Impossible’ about the Indonesian tsunami and was moved by tender moments of compassion shown by the natives to the survivors.

If you haven’t seen it, I recommend it. It’s not an easy film to watch, but illustrates the mighty power of the Ocean, and how when faced with immense suffering people’s humanity shines through.

Watch my 11 minute YouTube Video to see how the Game Changes this month!

Mars changes sign on Tuesday March 12th into Aries. This is excellent news as the element of fire has been missing since January as the personal planets have been in air or water signs!

A word of caution- Aries can be rash, hotheaded and ungrounded so don’t take any life changing risks just yet.

Balance is needed and the days when the Moon is in an earth sign- Taurus, Virgo or Capricorn – can help ground this fiery energy.

I am now publishing the current Moon phase on my website, showing the phase and the sign its in. I will alert you via my Facebook page, so join now. See link below.

The electric energy of Uranus will be energised by Mars on March 22nd, followed by the Sun on 29th.

If you didn’t set any goals at the New Year then I urge you to take advantage of this Aries energy. Aries in a new beginning-the season of Springtime. I will publish a special newsletter for the Spring Equinox.

This Perfect Health journey begins on March 11, but it’s not too late to join! Free registration remains open during the entire 21-Day Meditation Challenge™.
From Oprah and Deepak:
“We will be your guides each day as together we discover how to recognize our body’s natural perfection and leverage its inherent wisdom. In our interactive online program, we invite you to meditate and journal with us to embrace the vision of your best self, expand your understanding of your miraculous body, and achieve greater balance and wellbeing. Please give yourself this gift with infinite benefits and sign up now for this transformational, three-week guided meditation journey toward the triad of whole wellness—mind, body, and spirit. We look forward to an amazing three weeks together!”

PICTURE CREDIT
Representation of an eight-week dolphin foetus inside its mother’s womb. (Image: Channel 4/PA)
Scientists captured the images for a National Geographic Documentary called ‘Animals in the Womb’.

The images were also used on a Channel 4 documentary ‘Animals in the Womb’ which aired in 2009.

They were created by using a combination of ultrasound scans, computer graphics and small cameras -as well as some carefully created models-  to document the animals development from conception to birth, and give an unparalleled glimpse into a world that few of us would ever expect to see.
*NB. Planets aren’t actually doing anything to us. Rather there is a synchronicity -“As above, so below”.