Celebrate the Goddess at the New Moon in Taurus 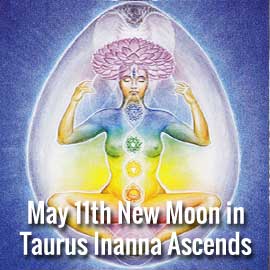 The Goddess rises: Venus is now visible as an Evening Star.

In the myth of Inanna The Queen of Heaven is brought back to life after 40 days in the Underworld. If you are influenced by Venus- having any planet in Taurus or Libra-then you may have been feeling invisible.

Inanna’s journey back to Heaven begins as the Moon joins Venus on 12th May at 23.20 BST at 5 degrees Gemini.

Venus at the 1st Gate of Manifestation and Shakti

In mythology: “In Hindu India, Shakti (pronounced shock’tee), the Goddess, is active, powerful, vital – the animating force of the universe. The masculine is the passive, inert, dormant force. Each Shakti has her God with whom she unties in sexual union. Without union, neither can do anything. To the Tanric mystics, the ultimate union with Shakti happens at the moment of death. Shakti, portrayed here seated within the luminous world egg, is protected by the serpent, kundalini, the emanation of her own divine energy.

This is Gate 1 -the Root chakra and the Gate of Manifestation. Inanna regains her Royal Robe.

Look at your chart to see where this occurs.

The next Gate will be on 11th June at 12 degrees Cancer. It’s the Sacral chakra-The Gate of Creativity. Inanna will regain her ankle bracelets.

The second chakra is the centre of feeling, emotion, pleasure, sensuality, intimacy, and connection. The energy of this chakra allows you to let go, to move, and to feel change and transformation occurring within your body

The Pleiades are activated at this New Moon in Taurus.

The Moon is moving through the sign and the constellation of Taurus. These are a group of 7 stars, known as the 7 sisters and its where the Moon is exalted in Taurus. The brightest star is Alcyone ‘The Queen who wards off evil’. They are mystical and the story of Alcyone is connected to the Kingfisher.

“While in Polynesia they believe that this bird has a command on seas and waters. The Kingfisher stands for peace and prosperity. It is connected with Jupiter which is a symbol for abundance and wealth. A kingfisher is a symbol of fertile harvest and good fortune.” Rather significant as Jupiter moves into Pisces, a water sign on Thursday 13th May.

If you have the Moon in your chart near Alcyone you may have visions and mystical abilities.

From the internet:-Companions of Artemis, were the seven daughters of the titan Atlas and the sea-nymph Pleione born on Mount Cyllene. The Pleiades were nymphs in the train of Artemis, and together with the seven Hyades were called the Atlantides, Dodonides, or Nysiades, nursemaids and teachers to the infant Dionysus. They were thought to have been translated to the night sky as a cluster of stars, the Pleiades, and were associated with rain.

The Pleiades were daughters of an Amazonian queen. Their names were Maia, Coccymo, Glaucia, Protis, Parthenia, Stonychia, and Lampado. They were credited with inventing ritual dances and night time festivals. New Moon in Taurus

There are two striking aspects at this New Moon in Taurus. First is a sextile of the Sun and Moon to Neptune, perfect for meditation, listening to music that opens your heart and watching a great movie. Eat Pray Love seems to sum up Taurus in all its guises. The book is better as the author Elizabeth Gilbert shares her experiences of meditation.

Rumi’s A Gift of Love is the perfect video to watch. I share it here. Its intoxicating.

Uranus sextile to Mars Uranus is the Magician, Mars the warrior

Tune in to your Magician, in the tarot he rules all 4 elements, pentacle (earth), sword (air), cup(water) and wand (fire). As Mercury weaves its magic through its home sign of Gemini we are in for a treat. Mercury goes retrograde on May 29th and stay in Gemini until July 11th.

On 3 days Mercury forms a square to Neptune. These squares are May 23rd, June 5th and July 6th.Be aware of any get rich quick schemes, or scam phone calls or emails. Scandals are also associated with Neptune.

We still have 9 days until the Sun moves into Gemini on May 20th, so take time out to enjoy planet earth.

4th Mercury into Gemini- a boost for clear communication

9th Venus into Gemini The Twins

12th Moon joins Venus: Rise of the Goddess Inanna as she returns to Heaven

13th Jupiter into Pisces: A sign that Jupiter rules, highly beneficial for teaching.

29th Mercury Retrograde in Gemini for the second time this year

Astrology is an ancient science and art that has been in use for centuries. The planets are named after the Mediterranean gods of ancient Rome and Greece. This illustrates the awareness possessed by our ancestors of the synchronicity between the activation of life’s archetypal energies and the movements of heavenly bodies that seem to measure the timing of these events.

The asteroids lie in a belt that orbits between Mars and Jupiter. It is now known that this belt is comprised of thousands of asteroids, but the first four were discovered in the late 19th century, many years in advance of the rest.

Each of the asteroids and Chiron are described by:

Chiron was discovered in 1977, and was named after the wise Greek centaur who tasted immortality. Chiron lies between Saturn and Uranus and occasionally passes within the orbit of Saturn. At first thought to be a comet or asteroid it is now considered a “planetoid” or small planet-like body.

The astrological portraits of the asteroids and Chiron have emerged through the observations of fascinated astrologers over the last century. This report informs you of their symbolic meaning and gives you insight into how they operate in your own horoscope.