With Venus in Aries starting a new shamanic cycle, feminine leadership is the strongest theme I see emerging this year.

In February I attended an Intensive Training to become a One of Many™ Women’s Certified Coach. This Programme identifies 5 Soft Power Female Archetypes.

It also identifies the false highly driven adrenaline fuelled Superwoman archetype. This is the shadow of Venus in Aries.

I really thought I’d left this behind when I left my career as an Art Director on a national newspaper. Deadlines were a daily part of my life, and I admit I did relish meeting them.

However, this archetype leads to burnout. On the training course I was finally able to acknowledge that I am in fact highly stressed even though my strongest Soft Power Archetype is the Sorceress.

In traditional astrology the Moon and Venus are the only feminine planets. For those of you who have attended my webinars will know, I have been following the Shamanic Cycle of Venus as a Morning Star and Evening Star for the last 18 months.

Venus as Inanna Queen of Heaven 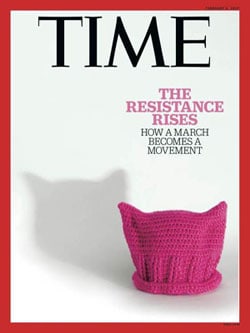 On January 31st Venus joined the Moon in Pisces and opened the Gate of Authority and the Crown chakra.  If you’ve been following the news, then you will be aware of the Women’s Marches worldwide.

Venus joined the Moon on February 28th in Aries which is called the Ascension Gate, or Life by Intent. She was restored as Queen of Heaven.

“The pink symbol of what may have been the largest protest in U.S. history has gone from the streets and social media timelines to the front cover of TIME.

A perfectly knit pussy hat, the cat-like homemade hat that has become one de facto symbol of a Trump administration opposition, commands your attention in the minimalistic cover complete with a powerful headline, “The Resistance Rises: How a March Becomes a Movement.”

As I have been tracking the Shamanic cycle of Venus for the past 18 months, we are now poised to see Venus as an Evening Star disappearing from the night sky to re-emerge as a Morning Star.

On this beautifully illustrated presentation Pam will help you to discover your Archetype as it relates to the Venus Shamanic Cycle.

This year we will see the rise of women into leadership as Venus starts a whole new cycle in Aries, sign of the Warrioress.

Discover Your Shamanic Venus Archetype on this webinar and the deep significance this has in your life.