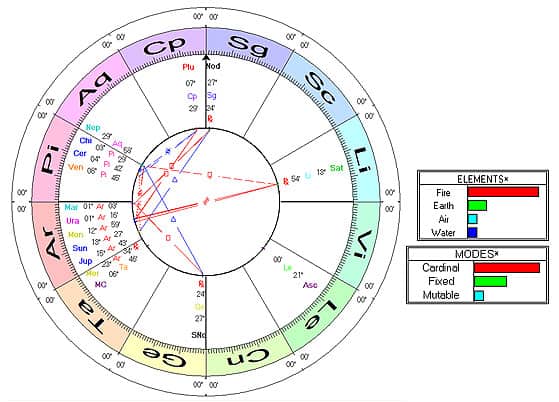 Above is the chart set for the new moon. Notice the amount of planets in Aries, a strong contrast to last month when there was an emphasis on Pisces. It’s Spring and traditionally the time to plant seeds, set goals and initiate new projects.

This is time to birth.

However, many factors tell us to wait a while. Here are my top 6 tips to work with this powerful and complex New Moon over the next 2 weeks. 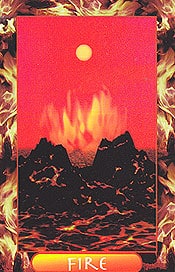 1. There is a huge imbalance of the elements. Fire dominates, and there is little earth and scarcely any air (communication) and water (feeling). Plus the fire element is cardinal which signifies action, NOW!

This can be interpreted as a strong urge to move forward, no matter what stands in the way. We want it done now, and our needs met immediately. However, power struggles and fights come from control. The birth is imminent but now isn’t the time to push.

Cool down. If you feel yourself getting impatient and too ‘pushy’ take time off, go for a walk, or meditate. Remember do you want to be right or happy?

2. There are 4 planets in impatient Aries. Aries is bold, acts on impulse but can be reckless. Its the first fire sign, and fire -when its out of control -is dangerous. Mars is joining Uranus, the most volatile planet. In the tarot this is the Tower.

Keep grounded. Move and drive with added awareness of your surroundings watch out for reckless behaviour. Exercise that build muscle-especially gardening as its so grounding-will be a positive way to use this energy.

3. Saturn is opposite this lunation. Its the planet of resistance, of fear and guilt. It is also the planet of maturity and governs time. Before launching anything new, we would be well advised to make sure the structure is solid and discuss with experienced individuals. Listen to the advise of our elders.

Any authority conflict will take us off our centre. Be flexible and willing to change plans. Impulsive action can result in a crash and burn.

4. Mercury is retrograde until April 23rd. It has reached the same place it was at last month’s Full Moon. It is the Messenger and Guide of the zodiac. It joins the Sun on April 9th. Take a note of that date. When Mercury is next to the Sun it’s called ‘cazumi’.

There is no objectivity in communication. Be very careful about dashing off emails without thinking, you may be misunderstood. Double check arrangements and backup data!!!

5. Neptune enters Pisces on April 4th. Neptune is the God of the Oceans, now in its own sign. This a very slow moving planet. It orbits the zodiac in 165 years, and one sign in 13 years. The effect is already noticeable as Chiron is now in Pisces. Neptune rules gases, the ether and the invisible. This is the wounding to the oceans, the tsunami in Japan that has affected the whole world.

In the Light of Love is a YouTube video by Mit and Deva Primal. They were recording it as the earthquake and tsunami struck Japan.

At the end of the song comes a series of messages from a survivor called Anne who lives in Sendai.

I urge you to watch it. The song and the images are heart opening. We are all connected, and the extraordinary way of how the Japanese are facing this tragedy is a lesson to all of us.

Compassion, forgiveness and prayer are the keynotes. The negative is a tendency to feeling overwhelmed, resulting in despair. The opposite sign of Virgo balances the negativity.

If you are sensitive to energy, take care to support your immune system. Drink plenty of pure water to flush out toxins. Discriminate what you watch, read and who you listen to. Is it life enhancing or does it bring you down?

6. Pluto goes retrograde in Capricorn on April 8th until September 16th. This is a once yearly occurrence but it’s happening close to this lunation. Pluto as God of the Underworld can uncover what has been suppressed, hidden and buried. A retrograde planet is like a rewinding, returning to the past and reviewing. It is a planet that mainly governs the collective – have the Japanese been told the whole truth?

If anyone has been lying to you, then ask yourself:-what secrets have I been hiding? Time for honesty, to come clean about any integrity issues you may have.

I recommend that you sow seeds, research, get clear about your goals, meditate and prepare. The New Moon energy is in effect until the Full Moon April 18th. That’s the very day when Mars finishes its opposition to Saturn. Soon after on April 20th the Sun moves into Taurus and we have some stabilising earth energy. 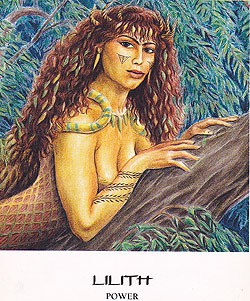 Goddess of the Month: Lilith

The New Moon is close to the Black Moon Lilith. Lilith has just entered Aries and stays there until December 17th.

The black moon is an astronomical phenomenon. It is not a planet but a sensitive point which can be calculated from the moon’s orbit around the earth.

The Moon’s orbit is not circular but slightly elliptical. An ellipse has two focuses. If you take the lunar orbit, you have the earth in one focus. The other one is empty. And that’s where we find the mysterious Black Moon, Lilith.

Lilith could be called the “shadow sister” of the earth.

In the story, Lilith was the first wife of Adam, and refused to lie under him, saying she was his equal. Adam complained to God and so Lilith was banished and demonised. Eve was then produced from Adam’s rib and became his subservient wife.

So began the patriarchy and women were not allowed to speak to God directly or become priests.

As a goddess she represents Power. The card is from The Goddess Oracle Deck & Book Set by Amy Sophia Marashinsky, illustrated by Hrana Janto and available from Amazon. I first worked with these cards when I co-facilitated a series of Goddess workshops, Its a wonderful book and deck of cards.

On my Spring Equinox Workshop the first person to focus the workshop had chosen B91 in the Aura-Soma Tarot reading that I gave everyone beforehand. This is olive over olive and it signifies Feminine Leadership.

No surprise then, that she was the pioneer!

In the Aura-Soma system, olive is the colour that bridges the yellow of the solar plexus and green of the heart.

Aura Soma works with The Colour Rose which has 12 colours that correspond with the 12 signs of the zodiac.

Olive relates to Chiron, known as the Rainbow Bridge, and to the sign of Virgo, as the 6th sign. This is the most healing of the signs. As it is the opposite Pisces it brings Chiron and Neptune’s energy into balance at this time in our aura, and on our planet.

The olive branch is the symbol for peace, and of hope because the dove carried it to Noah after the flood. Pallas Athene gave the olive to the people of Athens and so they named their city after her. The negative aspect is bitterness. Olive is a natural anti pollutant and can clear jealousy, and envy. It is ideal for clearing space, especially useful for therapist between clients.

The olive pomander is available from Dolphins and Angels. The Quintessence it relates to, is The Holy Grail and Solar Logos and one of my favourites.

Woman Standing in their Power

A wise woman alerted me to listen to Lucia Rene, a female mystic and ordained Buddhist nun who has written a book called ‘Unplugging The Patriarchy, A Mystical Journey into the Heart of a New Age’. She runs a workshop called Women Standing in their Power.

Lucia Rene speaks about the spiritual essence of women and men and how it has been corrupted during the 5,000-year Patriarchal Era.

When men step onto the spiritual path, and begin to question, their first step is the path of the heart called Bhakti Yoga. Then they graduate into Jyanna Yoga which means discrimination. This is the reconciliation of all opposites.

For women its the path of service and devotion called Karma yoga. This is, she says, because women know how to get things done. This is service to the guru, and like Mother Theresa, to humanity, the community and to the sick.

But then the woman graduates to study power. That’s what she calls Mysticism.

5.000 year ago women gave the reins of power to men, so men would ascend to the heart.

‘ Power’ has been misused by the unconscious masculine. Power comes from The Sun, its our life force. It’s not power over others, but power that is within us, and passes through us.

In terms of chakras, as women we need to reclaim our 3rd chakra, the Yellow, the solar plexus power chakra, and for men its their 4th chakra, the green of the heart. Balance comes in the olive green.

In my experience women’s issues have mostly to do with feeling powerless. We are already in our hearts. 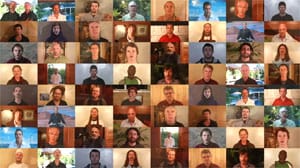 Just as I was writing another YouTube was highlighted for me. Entitled ‘Dear Woman’, Gay Hendricks, Arjuna Ardagh and a group of ‘Conscious Men’ from around the world offer apologies to women for thousands of years of imbalance between masculine and feminine energy, as well as vision of a new era of co-creation. There’s no doubt that they are coming from a heart centred place.

These readings offer you valuable information about your spiritual journey and the colours and chakras that are being activated, and those you need to rebalance.

The act of tarot reading is related to Chiron, palmistry and chiromancy and comes from the Greek cheir which means hand. (An example is the chiropractor who uses their hands for healing.)

Pam loves using cards as a way of opening up the intuitive feminine aspect with her clients. Working with colour, light and the chakras is truly divination, inspiration from the gods! Some amazing insights have come through.