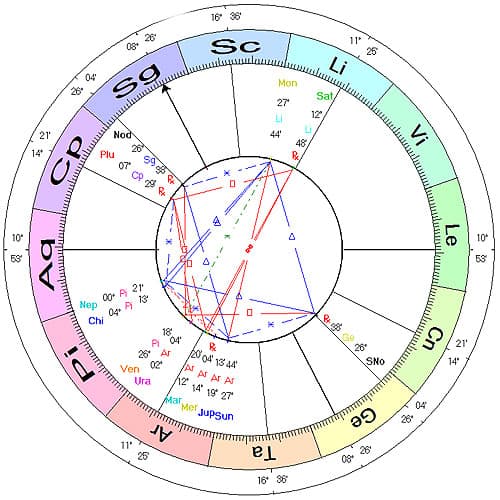 Embracing our Masculine and Feminine

The April Full Moon is in the small hours of Monday, but you can feel and see its fullness over the next 2 days.This full moon emphasises the signs of Aries and its opposite sign of Libra.

This is ‘me’ versus ‘you’. This is the relationships axis. And they may have been strained (if not downright bloody) over the last month.

Oppositions of the Sun and Moon happen every month, as the the Moon is fully reflecting the light of the Sun.

This full moon is the third in a series of Super Moons when the Moon is closest to the earth and appears larger. Full Moons bring out emotions. Already you may have experienced the Moon joining Saturn on Saturday, a day of withdrawal and possible feelings of loneliness.

There are still 5 planets in Aries, that’s a lot of fire, and its all cardinal, which is initiation and action. However there has been considerable resistance to moving forward because Mars has been moving to oppose Saturn.

I always describe this as driving with one foot on the accelerator and the other on the brake pedal. Ouch!!! The Sun changes sign into Taurus on April 20th, signalling a far steadier and grounded end to the month.

Mars is the planet of war, the archetype of the Warrior. In our modern world that warrior is the footballer, the rock or movie star rather than the soldier. Mars is how we express our needs, and assert ourselves.

Mars is the Inner Warrior. It wants us to stand our ground, to define what we want and it helps us to develop our will. There is a fine line between the small will which is self centred and pushy, and the right use of will, which is for the higher good of all.

The movie Fight Club very cleverly demonstrates that fighting for fighting’s sake is the ego.

The journey Mars takes from April 2nd to May 11th through its own sign reveals a process; it’s the hero’s journey.

First it met the Revolutionary (Uranus on April 3rd) now it meets the Messenger (Mercury on April 19th) and then The Priest (Jupiter on May 1st). It also makes an opposition to Saturn at this full moon, and that’s been the problem over the last week as the tension has been building.

With all oppositions someone in your life has to play out the opposition.

Which side are you on? Protagonist or recipient? Have you been ‘Marsy’ and let off steam on some unsuspecting soul? Or agreed to everything (Saturn in Libra) only to boil under the surface?

Mars in Aries expresses anger in a clear, direct way. Arians are known for their outspokenness, but also what you see is what you get. Libra on the other hand can be so nice and easy going, but all around them people are seething because they can’t make up their minds. Libra wants to please. So it can be passive aggressive.

Fortunately over the next few days this opposition moves away and at last everything that’s been on hold can get the go ahead. (Just one proviso – Mercury is still retrograde, so after April 23rd communication will be smoother.)

Once Mars joins The Priest/Guru/Teacher on May 1st, all can be be resolved, and the probabilty is that peace can be achieved for the highest good of all.

However Saturn is a planet that helps create good boundaries, is excellent for discipline and order. Its our Inner Elder or Wise Man or Woman. Its the planet that tests us to the limits, and if we pass the test we gain self knowledge and self respect.Â  It is truly interesting that Mars is exalted (i.e. the best) in Saturn’s sign of Capricorn.

Action needs to be restrained, competition turned to co-operation. Just as action without structure is like going to war without a battle plan.

At this full moon Venus (The Goddess) is in Pisces, her sign of exaltation. This is the highest vibration of love, of the Goddesses Kuan Yin or Mother Mary.

Elizabeth Taylor, who died on March 23rd, was a Pisces, and the ultimate screen Goddess. She was also a humanitarian and her life was one of triumph against all odds, including multiple serious illnesses. I watched her story on TV over the weekend and was impressed by how many people spoke of her kindness and her humility. She had the Sun in Pisces next to Mars, and Venus next to Uranus in Aries. Her Moon was in Scorpio, her rising sign Sagittarius.

These planets and signs describe her well; her sexuality (Scorpio), her ups and downs in relationships (Venus next to Uranus) and her ability to stand up and fight for those afflicted with AIDS (Sun with Mars) when it was a deeply taboo subject. The Sagittarian ascendant was her Goddess status, her larger than life grandeur, her love of opulence and also her strong religious faith.

On April 21st Venus moves into Aries. This is the Goddess Diana the Huntress. On April 23rd she joins Uranus. This is a classic ‘love at first sight’ aspect. That very day Mercury moves forward, so be open to some pleasant surprises, especially via email or texts!

Workshop in London with Chuck Spezzano

Chuck Spezzano is my friend and teacher and this is one event this year that I just have to attend! If you want to be in the presence of a master with the naughtiest sense of humour, then you’ll want to be there.

On my first ever workshop with Chuck and Lency Spezzano, I learnt more in 3 days about relationships than I had in 40 years!This incredible Psychology of Vision model is evolutionary, and Chuck is always at the cutting edge of spiritual psychology.

The 3 day workshop is entitled ‘Relationships- The Stairway to Heaven’. Click this link to find out more. If you sign up please mention my name to Avril and see you there!

Workshop in London at the Summer Solstice with Pam

If 3 days with Chuck isn’t your preference, then I’d like to invite you to my next workshop in London on June 18th/19th. This is for a small group (maximum of 12) and offers personal attention both before and after the workshop. This special weekend is just a few days before the Summer Solstice.

As we approach the astrological month of Cancer, we embrace the feminine, nurturing mothering energy of the first water sign of the zodiac. This year the Summer Solstice is just a few days after a powerful Full Moon Lunar Eclipse on June 15th. This is directly aligned with the Galactic Centre, the Great Cosmic Mother and ‘womb’ of our planet.

The workshop focuses on feminine leadership. Entering a sacred circle of stars we will participate in healing processes to:

The image I have chosen is bottle 99 in the Aura-Soma Colour system called Archangel Tzadkiel. The colours are pale olive (feminine leadership) above pink (Love ). It helps us to step into the waters of life, and get in touch with who we really are. In the tarot it’s the highest vibration of The World, symbolic of completion of a cycle.