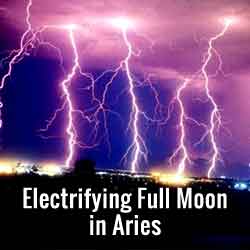 The full moon in Aries is explosive.

The planet of chaos- Uranus- is conjunct the Moon, and therefore opposite the Sun.

Uranus is the force for awakening us to higher consciousness. However it doesn’t care if we have a nice day!

This full moon in Aries has an influence all week. Its electrifying!

It’s a wake-up call for a step up in consciousness.

However, this lightning force needs grounding. Mars and Pluto in the earth sign of Capricorn can give us the energy and focus for transformation. 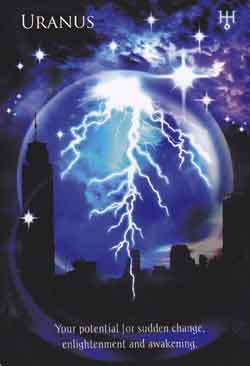 Uranus is similar to the energy we feel in a thunderstorm as the lightning flashes and crashes in the sky.

Its the lightening force of awakening. The air feels fresher as negative ions are produced. We can breathe it in and feel renewed.

However, we all know that lightning can be dangerous.

How have you been feeling?

Have you been feeling ultra-restless over the last week, culminating on Saturday night as we approached the full Moon?

For those of us who have Uranus strong in our birth charts, this last full moon could have left you feeling exhausted.

My father taught me that when dealing with electricity it was vitally important to be insulated and grounded. One way is to walk on the bare earth. However, that isn’t always practical. My solution was to buy Nikken’s magnetic insoles-see below. 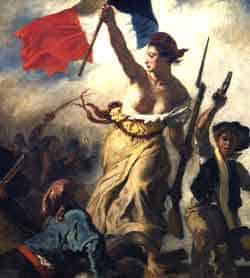 Uranus governs the process of individuation. He was the Original Creator/Sky God called Ouranus.

Its discovery way back in 1781 expanded the known boundaries of the Solar System for the first time in history and it was the first planet to be discovered with a telescope.

When a new planet is discovered it means there is a new consciousness on our planet.

That consciousness was revolution in the world:-

Aquarians and those of us who are heavily influenced by Uranus are the bohemians, the beatniks, the hippies and the non-conformists.

Aquarians and those influenced by Uranus are the revolutionaries, the anarchists, but also the humanitarians and the astrologers.

They often work in politics, as they want to change the world.

He talks about power, and how the energy of Libra has the tendency to compromise and try to please others.

He is a Vedic astrologer and his words have great wisdom.

People are going to shoot arrows at you when you step up to be something bigger and more powerful.

What you’ll see is those around you who aren’t acting in their highest power will start to criticise you.

And that’s when you really test the Sun.” Sam Geppi

The astrological Sun is our centre, our strength, power and our courage to act from our heart.

The magic lies with you.