Its a potent full moon as the planetary picture has changed dramatically since the Scorpio New Moon on November 7th.

Please watch my YouTube video for some enlightening insights into this Gemini Full Moon and feel free to share this newsletter with your friends.

The Pleiades are activated at this full moon.

Although the Moon is in the sign of Gemini, it is actually moving through the constellation of Taurus. The Pleiades are the Seven Sisters and the brightest is Alcyone ‘The Queen who wards off evil’. They are mystical and the story of Alcyone is connected to the Kingfisher. If you have the Moon in your chart near Alcyone you may have visions and mystical abilities.

From the internet:-Companions of Artemis, were the seven daughters of the titan Atlas and the sea-nymph Pleione born on Mount Cyllene. The Pleiades were nymphs in the train of Artemis, and together with the seven Hyades were called the Atlantides, Dodonides, or Nysiades, nursemaids and teachers to the infant Dionysus. They were thought to have been translated to the night sky as a cluster of stars, the Pleiades, and were associated with rain.

The Pleiades were daughters of an Amazonian queen. Their names were Maia, Coccymo, Glaucia, Protis, Parthenia, Stonychia, and Lampado. They were credited with inventing ritual dances and night time festivals. 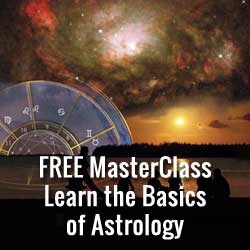 Astrology is a language. Are you keen to learn the basics?

Like all languages you will benefit when you know the basics in order to learn how it works. On this beautifully illustrated MasterClass Pam will introduce you to the building blocks of astrology. This presentation is part of her Planets Within Astrology Course starting in January 2019. Its worth £25 but for you its free!