This is the January New Moon, the first of the year. It occurs at 0 degrees 8 minutes of the air sign Aquarius. This is the 4th and last New moon at the beginning of a sign.

Air signs are signs of communication, and so are all connected to Mercury the Messenger.

Mercury is just about to go retrograde on January 22nd in the sign of Aquarius, so it is pertinent to analyse this sign more fully. I am quoting at length in this newsletter to give you food for thought and meditation.

Mercury will make an aspect to Uranus in Aries 3 times, which promises genius, ideas that come out of the ether. Put these dates in your diary and take notice of messages:Jan 14, Jan 8 and March 1st.

It also makes 3 postive aspects to Saturn in Sagittarius grounding these inspirations and bringing them into manifestation. January 5, February 5 and 19th.

Aquarius and the Gods

Aquarius is the sign of humanity, the Water carrier and The Star in the tarot. Aquarians are usually popular as they are associated with the Star groups of the Eagle,the Dolphin or the Swan.

I suggest that you follow the energy of these powerful symbols as the month progresses.

January 14-28 The Eagle- bird of Zeus/Jupiter. Spirit and the Sun. Symbol of Vision.

Ganymede pours out the nectar for the gods. However in India the Eagle is called Garuda, the fair featured eagle. Garuda gives us the Soma, the nectar of the gods to all mankind. This is similar to the story of the titan Prometheus who stole fire to give to humanity.

Catherine Tennant in her book The Lost Zodiac (which I own and recommend) writes: 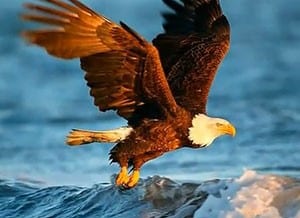 “Aquila, the Eagle, the symbol of the soaring intellect and astrology. At the funerals of the Caesars, during the great days of Rome, a captive eagle was released into the sky. It symbolised the Emperor’s soul, free, at last, to join the gods.

No one can compete with you on a mental level, as the sheer speed of your thoughts leaves others standing. But you are also passionate and intense, and, if you are not careful, you can leave your real self and feelings far behind.”

“The Dolphin, which, despite its size, was called ‘the glory of the flood of stars‘ is a symbol of philanthropy, it was the Sacred Fish in ancient Greece, where it was the messenger of the sea god, Poseidon (Neptune).

Intelligent, free-thinking, sensuous and sensitive to others, you love life and are natually creative and musical. You resent restrictions and are only happy when you can live life by your rules.”

Cygnus, the Swan, which was sacred to the Greek god of poetry, Apollo. ‘In its own person, the Swan hides a god and the voice belonging to it’, wrote the Roman astrologer, Manilius. The swan is a shape shifter, and stories of swan maidens, and of humans transformed into swans, abound in myth and folklore.

Passive and contemplative, you can play any role the world imposes on you, but anyone who thinks that they can pin you down is doomed to fail. The swan is a symbol of personal growth and transformation and it is through playing many roles that you discover your real self and come into your own.” 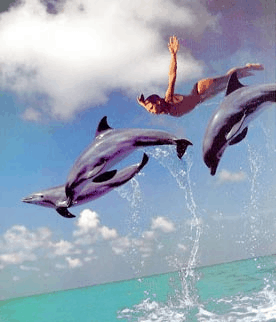 This is a wonderful analogy since the dolphin is playful and in service to humans through their joy. I was fortunate enough to experience being with a dolphin in Hawaii. I didn’t swim with them, I paddled.

This photo on the right sums up the wonderfully playful energy that being with these wonderful mammals brings.

In the ‘Medicine Cards by David Carson and Jamie Sams, the Dolphin represents Manna, the breath of life.

An excerpt from the book:-

“Manna is life force. Manna is present in every atom, and is Great Spirit’s essence. Dolphin teaches us how to use life-manna through our breath. It revitalizes each cell and organ, and breaks the limits and dimensions of physical reality so that we may enter the Dreamtime.

Dolphin was traveling the oceans one day as Grandmother Moon was weaving the patterns of the tides. Grandmother Moon asked Dolphin to learn her rhythms so that he could open his female side to her silvery light.

Dolphin began to swim to the rhythm of her tide weaving, and learned to breathe in a new way. As Dolphin continued to use this new rhythm, he entered the Dreamtime. This reality was a new and different place from the seas he had known.

Dolphin came to discover underwater cities in the Dreamtime, and was given the gift of primordial tongue.

This new language was the sound-language that was brought by Spider from the Great Star Nation.

Dolphin returned to the ocean of the Great Mother, and was very sad until Whale came by and told Dolphin that he could return to be a messenger to the Dreamtime dwellers anytime he felt the rhythm and used his breath.

Dolphin was given a new job. He became the carrier of messages of our progress. The Dreamtime dwellers were curious about the children of Earth, and wanted us to grow to be at one with Great Spirit. Dolphin was to be the link.”

In astrology the 12th house and its ruling plane Neptune are connected to dreamtime. This week Mars joins and activates Neptune in Pisces. If your sun sign is Pisces this is the beginning of taking action (Mars) to trust the Dreamtime.

The movie ‘Wild’ that premiers this month in the Uk, reminds me of ‘Mutant Messenger Down Under-A Woman’s Journey into Dreamtime Australia’ by Marlo Morgan.

I highly recommend this book. I agree with Elisabeth Kubler Ross:-

“The story of a courageous woman who walked with the Aboriginals and learned the wonderful secrets and wisdom of an old, old tribe. Things we all need to learn in our modern society: to get back in touch with nature, to trust and have faith in our inner knowledge and guidance.”

This book is a spiritual odyssey that resonates with the aboriginal concept of Dreamtime. Is it fiction? Read it and decide for yourself.

In the spiritual healing model ‘Psychology of Vision’ Dreamtime is a high level of leadership with many soul gifts. However the attack that comes from society to conform when we step into this space, can be immense.

Remember that Aquarius is group energy.

Only be being with soul friends and like minds on the spiritual path can we succeed in raising the vibration of our planet.

As a reader of this newsletter I recognise that its likely that you are on a spiritual journey. If you are experiencing attack then I suggest that it may be time to step up into the place of leadership.

My astrology coaching sessions are invaluable in reaffirming the soul gifts you came to bring in. See this page for more information>

On January 20th at 7.30pm GMT Still some spaces. Watch live as there is time for questions at the end. The recording of this hour long MasterClass video is only available to those who sign up.

Register for Free Webinar 2015 Year of the Goddess