Leo New Moon –  Leadership is the Theme of the Month 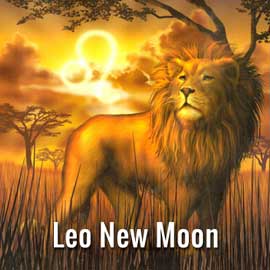 Courage, leadership and play are highlighted at this Leo New Moon with 4 planets in Leo. This is the sign ruled by the Sun and the symbol is the lion.

The main news at this New Moon is that Mercury is now direct. While Mercury was moving retrograde it was travelling through the sign of Cancer during the last 2 weeks of July, as well as most of June.

Have you been flooded by old memories, especially if you have planets in Cancer?

When Mercury moves into Leo on August 12th, its a call for us all to step into our leadership and speak our truth. At this Leo New Moon the Warrior planet Mars is aligned with the Sun, Moon and Venus. This is an energy which has to be expressed physically through dance, martial arts or wrestling with the kids.

Please watch my video for more insights. I can speak faster than I can write!

One reason I love this system is it focuses on the Moon.

In India a different system of celestial signs has also been used. It is a system of 27 signs and each sign has a length of 13 degrees and 20 minutes, rather than 12 signs of 30 degrees each. These 27 signs are known as “nakshatras”.

Each month the Moon God travels through 27 lunar mansions, the nakshatras. He is visiting his 27 wives in turn- his favourite is called Rohini in sidereal Taurus.

At this New Moon the lunar mansion is called Pushya, in the constellation of Cancer. It’s deity is Brihaspati (Jupiter) who is the priest and teacher of the gods. It is a devoted nakshatra, caring, nurturing and good. Keywords are prosperity, expansion, popularity, nourishing and happiness.

Great time to start a project

This nakshatra is highly auspicious since any venture started in this lunar mansion is favourable. The Sun stays there until August 3rd. Then Mercury travels through Pushya from 10th August until 17th August.

Now Mercury is moving direct, plans that have been thwarted can go full steam ahead!

As Venus is now in Leo it invokes the Archetype of The Queen/King. I have 2 astrology reports that focus on the feminine in your birth chart.  The first is The Goddess Report.

Another is called Just For Women

This is a wonderful report to give to yourself, or as a present.

This is an intimate tour of your natal chart that clearly shows you the full range of talents and resources you possess and may not be full aware of.The roles that women are asked to play have changed and are continually evolving. Today, a woman is often expected to carry out the tasks of a career person, a wife, mother, community leader and more – all simultaneously.

In your Just for Women report Gloria carefully reveals each layer of your complex character to give you access to all of your strength and power. This is not just an intellectual exercise it is an empowering journey that can invigorate and energise your life.

Gloria Star has used her years of experience to create Just for Women, a natal report that covers every facet of the modern woman’s experience:

Find out more about the Just for Women astrology report>

This is the perfect time for a Consultation.

“Pam is an amazing astrologer. She brings to her consultations a brilliance and clarity that provides insights which have proven to be very valuable. I have listened and learned so much from her and her sessions have provided me with an in-depth look at my world which has given me the opportunity to make the right choices. I would highly recommend a consultation with her.” Susan How

“Thank you so very much! I feel that another major shift has occurred, and that the way forward is exciting. I am raring to go with the family, and now more fully understand (and acknowledge) that being number 4 in the kids lineup, is tremendous. I’m excited and invigorated.” Merril