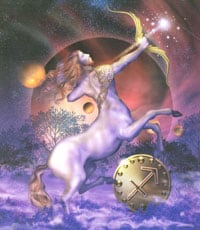 New Moon Theme of the Month: Adventure and Intensity

The New Moon on December 16th is rich in symbolism. It is in the last fire sign of Sagittarius and forms a striking square aspect to Uranus the ‘wild card’ planet of sudden change in the element of water. Fire and water create steam so this can be a month of hot air, heated exchanges and creative ideas that come out of the ether. It can also result in shocks and restless sleep patterns.

Watch the News today
You will find the themes of the New Moon reflected in the news. This New Moon is close to the Galactic Centre and occurs as the Copenhagen Climate Summit Conference is nearing its conclusion. The intensity has been showing up as the small countries are fighting for the survival of their countries. The president of the UN climate summit has urged delegates to “get to work” after protests from developing nations forced a suspension of several hours. This is the influence of Saturn square to Pluto which is prominent in the New Moon chart.

The strike by BA crew is set for 12 days over the Christmas holiday. The staff cheered the result of the strike ballot. Flight is ruled by the sign of Sagittarius. Mars in the fire sign of Leo is about to move retrograde on December 21st and there is a lot of anger and inflamed passions that this strike has aroused.

Tarot: Knight of Wands
The tarot card the Knight of Wands is called ‘the adventurer’ and relates to flexible intuition. It perfectly illustrates this month’s theme. I chose this card this morning after a restless night’s sleep. Some keywords are:-

The Knight of Wands is called Intensity in the Osho tarot. In the card deck:-
The figure in this card has taken on the shape of an arrow, moving with the single-pointed focus of one who knows precisely where he is going. He is moving so fast that he has become almost pure energy. The intensity represented by the Knight of Fire belongs to the present moment – a recognition that now is the only moment there is.

When you act with the intensity of the Knight of Fire it is likely to create ripples in the waters around you. Some will feel uplifted and refreshed by your presence, others may feel threatened or annoyed. But the opinions of others matter little; nothing can hold you back right now.”

Uranus and Your Nervous System
When Uranus forms a difficult aspect to the Moon it can result in stress and tension in the body. It can leave you feeling overwhelmed. This is especially true if you are sensitive to energy. The mutable signs of Pisces, Gemini, Virgo and Sagittarius and vulnerable this month. Plus if you’re born between 1964-67. This is because you have Saturn and Uranus opposite in your chart and Uranus is now where Saturn was at your birth. Its as if the heavens are playing your song -only its a high pitched vibration.

Listen to your body. Watch your diet and drink plenty of good quality water. As Uranus is in the water sign of Pisces, flower and gem essences are the ideal way to balance the energies in the body.

Jupiter in the Evening Sky
Look up one evening after sunset this week and make a wish. Jupiter is due south setting in the west around 9pm. It’s easy to spot as its the brightest object in the sky. It’s the planet of Great Good Fortune, teachers and gurus, knowledge, long distance travel and adventure.

If you want your dreams to come true then awaken your vision. Tarot cards are an easy method to tune into your inner world, and I use them on a daily basis. As the earth is still at this time of year, listen to your dreams over the next few days.