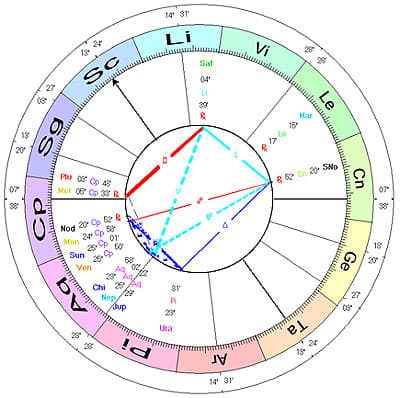 The New Year really starts at this first New Moon.  All New Moons are powerful but an eclipse is especially so.

Look at the chart and you can see that there are 5 planets and the North Node (destiny) in Capricorn.

Our consciousness is ‘rebooted’ at an eclipse.
At the time of an eclipse the stream of solar energy – ultra violet, x rays and electromagnetic energy – is interrupted for a few minutes. It’s a day for meditation and going within. It’s not a time for launching a new business. Wait a day or two.

Stepping Up to the next level
Think back to the last time the eclipse was at this degree – in January 1991. Ask what was important in your life then? In what area of your life are you now ready to go to the next level? Pluto in Capricorn is a powerful force that destroys and then rebuilds and transforms. This a is a year to build solid foundations in your life.

Commitment
Capricorn is a cardinal earth sign- it wants action and commitment. It’s the 10th sign of the zodiac, and naturally belongs to the 10th house-  the zenith of our birth chart, our career and status. Capricorn wants to get to the top. It asks us to commit and build what we want, step by step, just like the mountain goat, its symbol.

Keywords:- Responsible leadership, maturity, structure, determination, patience, get there in the end- no matter what.

Commit to Love as Venus joins the New Moon
Just like the lunar eclipse on December 31st, Venus joins the Sun and Moon. Venus softens the effect of ambitious Capricorn. It represents love and relationships. Venus is how we value ourselves and the money we earn. In Capricorn, Venus is realistic- we are being asked to spend our money wisely. This is time to invest in oneself. Clothes and furniture that are well made and last and old fashioned values will be making a come back.

Saturn and Venus connect in each other’s signs
At the New Year and in this New moon chart, Saturn is in the sign of Libra, Venus’s sign and Venus is in Saturn’s sign.  So there is an exchange of energy.  Saturn is exalted in Libra, which means that it gives of its best. This promises to be a year of strong enduring relationships. Not a year to mess around, or to rush in, but to enter into partnerships with sincerity, honour and truth.  Once Jupiter changes sign into Pisces (on January 18th) it is a brilliant year to get married!

Change direction
There is a huge amount of planetary movement at this New Moon.  Saturn turns retrograde on January 13th until 30th May. Mercury goes direct just after the New Moon.  Mars stays retrograde until March 10th. When planets go retrograde they change direction.  So this is a month when its time to reconsider what direction your life is taking.