This month I aim to give you information that has meaning for you. Let me know if I’ve succeeded!!

This Full Moon is at the last degree of Libra, the first of 5 full moons in a row that this occurs. The last degree of any sign is similar to the last sign of the zodiac- Pisces- and symbolises an ending and completion.

Its also a transition to the next phase.

We are in a time of transition on this planet, and the news looks bad as the Government announces major cuts. Many people will lose their jobs. I have been speaking to someone today who works for the NHS in middle management. She was able to be honest and say she wanted to leave for quite some time. She is gifted and a natural coach. This is time for her to spread her wings.

This is a time of death, but also of rebirth and resurrection.

Those that survive this transition, will be those who embrace change as a challenge and see the opportunities. The astrological picture endorses those who have courage to make radical shifts as Jupiter and Uranus continue to bring hope, faith and optimism that lightens the otherwise gloomy picture the Press will have us believe.

Whatever the doom merchants say- we are not reliving the 1930ties!!!

What’s going on for You?

If you are born 2 days either before or after these full moons, you will be called to complete a cycle in your life over the next 5 months, and move to the next stage of your evolution. As you do so you’ll be in sync with the upcoming Cardinal cycle that we are now moving into next year, and have had a taste of in August this year.

These are the dates of these full moons:- Libra/Aries October 23rd, Scorpio/Taurus November 21st, Sagittarius/Gemini December 21st, Capricorn/Cancer January 19th and Aquarius/Leo February 18th. So only Pisces/Virgo is unaffected!

APPLY THIS PRINCIPLE TO YOUR CHART: If you have a planet between 27 and 29 degrees in your chart, then that planetary energy is mature. You are in transition to the next level. You are an authority on that sign’s energy, have wisdom and compassion to share with others. (This is similar to the qualities of Pisces) How this manifests in your life, will be shown by the sign and position of that planet in your chart.
Likewise, if you have any planet between 0 and 3 degrees in your chart, you are exploring new territory and initiating a new cycle in this lifetime. This is akin to the sign of Aries. You may have a certain naivete, yet be bold and courageous, so need to take risks in that area of your life. Again, how these occur depends on the sign, planet and house involved.

Partnerships and Time for a Make-Over

Libra is the relationship sign and this is the second Full Moon in Aries. So we’re being signaled to finalise decisions around partnership, and complete projects that we began at the New Moon two weeks ago. With Venus now retrograde (the ruling planet of Libra and Taurus) until 19th November you may find people changing their minds around you. Keep moving forward and don’t take it personally!

With Mars,Â  Venus and Mercury all in Scorpio followed 11 hours later by the Sun, this is the month of the year for a make over. This could be your physical appearance , your home, your career or your business. The stars are helping with this transition. 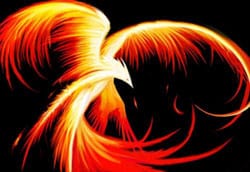 Inspiration for the Month: The Phoenix, the Firebird

The striking image of the phoenix is very apt as Scorpio as a sign has 3 symbols: the scorpion, the eagle and the phoenix/dove. The scorpion crawls along the ground and is the base instinct of sexual manipulation of others for gratification. The eagle is a visionary who flies close to the sun and soars above adversity. The phoenix is in a different league altogether.

Even though you may not be a Scorpio, that sign exists in your birth chart. That is the area under the spotlight for you this month. It’s a place of rebirth, of rising from the ashes to begin again.

A place where you can know yourself as immortal.

Again from my research on Wikipedia: The phoenix is a mythical bird that is a fire spirit with a colourful plumage and a tail of gold and scarlet (or purple, blue, and green according to some legends). It has a 500 to 1000 year life-cycle, near the end of which it builds itself a nest of twigs that then ignites; both nest and bird burn fiercely and are reduced to ashes, from which a new, young phoenix or phoenix egg arises, reborn anew to live again.

The new phoenix is destined to live as long as its old self. It is said that the bird’s cry is that of a beautiful song. The Phoenix’s ability to be reborn from its own ashes imply that it is immortal.”

The phoenix is revered in China- “A mythical bird that never dies, the phoenix flies far ahead to the front, always scanning the landscape and distant space.

It represents our capacity for vision, for collecting sensory information about our environment and the events unfolding within it. The phoenix, with its great beauty, creates intense excitement and deathless inspiration.” – The Feng Shui Handbook, feng shui Master Lam Kam Chuen

The Celestial Birds of the Southern Hemisphere

An interesting fact is that the Southern hemisphere was not observed by the ancient astronomers, so has no Greek myths associated with it. It wasn’t until the 16th century that the constellations were named. As usual Wikipedia gave me this information worth absorbing:-

“Today, the sky is officially divided into 88 constellations. In the northern celestial hemisphere, the names of these constellations are mostly based upon the creatures of Greek mythology passed down through the Middle Ages.

Constellations in the southern hemisphere were not observable by the ancient Greeks and were therefore unknown until two Dutch navigators, Pieter Dirkszoon Keyser and Frederick de Houtman, mapped them during their travel down south during the 16th century.

A German astronomer, Johann Bayer, included twelve of these new star constellations in his book Uranometria which was then published in 1603. He followed tradition and named some after mythological creatures, and others after recently identified animals.

Of the twelve Bayer constellations, Tucana (the toucan), Apus (the bird of paradise), Grus (the crane), Pavo (the peacock), and Phoenix (the firebird) from the celestial birds in the southern hemisphere. These bird constellations house some of the most spectacular objects observable only in the southern countries, with Australia being one of them.”

Talking a of birds, I was reminded of a bird today that is more of a Capricorn story than Scorpio, but it’s a classic. It’s ‘The Dead Parrot’ sketch by Monty Python, starring a very young John Cleese and Michael Palin.

A movie about a young woman who’s life falls apart when she’s told she has dumps her and she’s made redundant from her boring job. Rather than wallowing in self pity, she moves into a luxury penthouse and embarks on a spending spree of pure indulgence.

What happens to her next is amazing, uplifting and awesome. It’s a life affirming movie and very much a Scorpio story of transformation – from a mousy young woman, through to reclaiming her sexuality and finding her passion. Beautifully acted, Saffron Burrows shows us the three stages of Scorpio and becomes the firebird, the phoenix. It was released on Nov 7th 2008, a Scorpio movie in a Scorpio month!

‘Meeting Joe Black’ An old film but a personal favourite, with Brad Pitt as ‘Death’ coming to earth and giving Anthony Hopkins a short reprieve.

‘Witches of Eastwick’. The transformation of women into powerful witches by their sexual relationship with the devil, brilliantly played by Jack Nicholson. On TV this week.

‘The Sixth Sense’. Bruce Willis plays a psychiatrist in an exploration of death with a boy who sees dead people Great twist at the end.

‘American Gigolo’ The lower realms of Scorpio with sex for money, as manipulative gigolo Richard Gere gets betrayed (another Scorpio theme).