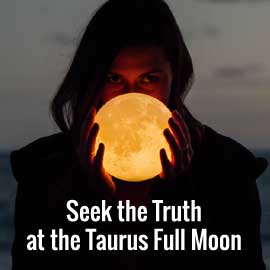 Full Moon in Taurus and Venus

This Full Moon in Taurus is influenced by the position of its ruling planet which is Venus. Venus is currently moving through Sagittarius so we are all being called to focus on what we value, what matters to us, what gives our life meaning. Sagittarius is on a quest for the truth. In a world of fake news, this is vitally important.

Sagittarius is the sign ruled by the planet Jupiter in Sagittarius.  On 24th November Venus catches up with Jupiter. This won’t happen again for another 12 years.

Look up into the night sky over the weekend 23rd/24th and see these two benefic planets join. This auspicious event urges us all to manifest our highest vision and truly reach for the stars!

The Sun is co-ruled by both Mars and Pluto so we need to look at what these two planets are up to. Since Pluto takes 16 years to travel through Capricorn, I use Mars to indicate the fortunes of Scorpio. It dramatically improves as it moves into its own sign of Scorpio on 19th November.

Mercury is ‘combust’ the Sun. Slowly Mercury moves away from the Sun giving us all a better sense of perspective. Mercury is never far from the Sun, so this combustion isn’t unusual. The usual advice of the times in the year when Mercury is retrograde is to be patient and check all arrangements. If you can, delay buying any tech -computer/mobile phone -at this time. Plus be aware of being clumsy in communication. Give people the benefit of the doubt.

Sun in Scorpio until 22nd November when it moves into the fire sign of Sagittarius.

Mercury is now in Scorpio from 3rd October until 9th December. It entered the ‘shadow’ on October 11th at 11 degrees Scorpio. It went retrograde on 31st October at 27 degrees Scorpio.

Therefore if you have any planet in Scorpio between 11 degrees and 27 degrees you will be connected to the energy of The Magician. Watch out for the signs and messages that come to you. This can be snatches of conversations that catch your attention, Facebook posts, news items that fascinate you, emails that arrive out of the blue.

Mercury retrograde joins the Sun on 11th November at 19 degrees Scorpio. It goes direct on 21st November at 11 degrees Scorpio. This Messenger  planet requires us to dive deep into our emotions, clear any issues in our unconscious and heal the Shadows within. I have Mercury in Scorpio, so I know this territory well!

Venus is now in Sagittarius. It makes a rare conjunction to Jupiter on 24th November at the degree of  The Galactic Centre, our Sun’s Sun and the heart of the Galaxy.

Mars in Libra until 19th November when it enters its home sign of Scorpio. Mars takes 2 years to travel around the zodiac. In Libra its weak so watch out for being bullied. And remember that you can’t please all the people all the time! Being able to be clear with your boundaries and take action is dramatically improves on November 19th as Mars moves into its home sign of Scorpio until 26th January 2020.

Jupiter in Sagittarius is aligned with the Galactic Centre, our Sun’s Sun. On 24th November Venus joins. This is a magnificent time for manifesting. This isn’t the same as manifesting a parking space, but much, much deeper. Sagittarius is the sign if the future, of the visionary, the philosopher.

The 12 Goddesses Astrology Report to buy

There are only 3 feminine planets- the Moon and Venus and now Ceres – and as every woman knows we are far more complex than that! As Ceres moves into Capricorn on 16th November it will then join Saturn and Pluto.