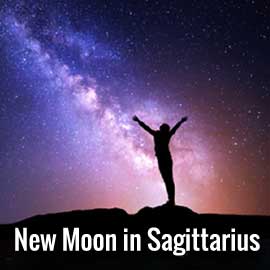 It’s the last New Moon with Jupiter in Sagittarius. This won’t happen again for approx. 11 years. Jupiter in Capricorn makes 2020 the year to ‘climb the mountain.’

Mercury is now direct in Scorpio, and Venus changed sign into Capricorn. Good news as Mars in now in its own sign of Scorpio. However there are no planets in air signs!

One exception will be when the Moon travels into the air sign of Aquarius at the weekend 30th November and 1st December, and then into Gemini from 10th December up until the full moon on 12th December. If you want to advertise and publicise a project they are the best times this month.

Venus will break the pattern on 20th December as it moves into Aquarius.

Sagittarius is the sign ruled by the planet Jupiter in Sagittarius.

Look up after sunset on 29th November to see the Moon, Jupiter and Venus together in the early evening sky. This is a rare sight, so enjoy! This auspicious event urges us all to manifest our highest vision and truly reach for the stars!

The Sun is ruled by Jupiter so we need to look at what this planet is up to. See below.

Sun in Sagittarius until 22nd December at the Winter Solstice at 4.19am GMT when it moves into the earth sign of Capricorn.

Mercury is now direct in Scorpio until 9th December when it moves into Sagittarius.

Mercury retrograde joins the Sun on 11th November at 19 degrees Scorpio. It goes direct on 21st November at 11 degrees Scorpio. This Messenger  planet requires us to dive deep into our emotions, clear any issues in our unconscious and heal the Shadows within. I have Mercury in Scorpio, so I know this territory well!

Venus is now in Capricorn still close to Jupiter at the Galactic Centre.

Mars is in its ‘home’ sign of Scorpio from 19th November until 26th January 2020. Mars takes 2 years to travel around the zodiac. In Scorpio it has the courage to see beneath the surface and can delve deep into the unconscious to expose secrets and bust open taboos.

Jupiter in Sagittarius is still aligned with the Galactic Centre, our Sun’s Sun.  This is a magnificent time for manifesting. This isn’t the same as manifesting a parking space, but much, much deeper. Sagittarius is the sign if the future, of the visionary, the philosopher. If you are caught in the place of fear tune into your future self and feel their support for you.

Uranus in Taurus is now retrograde and forms an alliance with Venus and Jupiter. Make some practical changes in your life and throw out anything that doesn’t bring you joy!

Neptune in Pisces goes direct on 27th November. This favours all the water signs. Watch your visions and dreams, get creative and meditate. I love the meditations with Deepak Chopra as he uses simple sanskrit mantras. See Chopra Center Meditation I like ‘Desire and Destiny’ as its perfect for manifesting.

The Perfect Present! The 12 Goddesses Astrology Report to buy

There are only 3 feminine planets- the Moon and Venus and now Ceres – and as every woman knows we are far more complex than that! As Ceres moves into Capricorn on 16th November it will then join Saturn and Pluto.