Aquarius is the idealist and humanitarian of the zodiac. It governs the calves and ankles and the circulatory system, which can leave those under this sign prone to problems such as cramps.

Aquarius is a networker and the symbol is the water bearer. The glyph looks like radio or airwaves.

It marks the time of year when the days are getting longer and in many parts of the world, the rains begin. This is the eleventh sign of the zodiac, when the energy is outgoing and universal.

Aquarius is the inventor and rebel of the zodiac.

Aquarius is a fixed air sign. As the last air sign it wants to communicate to the world and the Internet was the best thing for them! Aquarius is a very inventive sign. It’s governed by Saturn and also modern ruler Uranus.

Since Saturn is co-ruler of this sign there are two types of Aquarians. Those who are more Saturnian are traditionalists and love law and order. The Uranian types are eccentric and unconventional.

Uranus was discovered in 1777, at the time of the French Revolution, The American War of Independence and the Industrial Revolution in Britain. The phrase of the revolution –  liberty, equality, fraternity – is highly relevant.

Uranus is an extremely oddball planet. It takes 84 years to orbit and it is tilted at a very odd angle. At the age of 21, 42, 63 and 84 we have the urges to start anew, to break free of restriction and convention. We often shock our family and friends by our change in direction.

Aquarians have lots of friends and naturally hang out with a group. They are naturally friendly but can appear cool in their more intimate relationships.

The male can be quite whacky and non conformist. The female can appear as beautiful yet as distant as The Ice Queen. An Aquarian never follows the crowd, and their relationships are often unconventional. They need freedom and space. Long distant relationships can work for them. They need to be mentally stimulated by their partners so Gemini and Librans suit them well. They are intrigued by Scorpio’s depth but their emotional intensity can be too much. Best friends are Sagittarius and fellow Aquarians.

Aquarius is the constellation of the Water Bearer. Aquarian myths are concerned with great floods. The Greeks associated Aquarius with Ganymede, the beautiful Trojan boy who was the cup bearer of the Gods. In this cup was ambrosia which is the same word as the Sanskrit amrita, which is the nectar of immortality. So Aquarius is connected with the concept of a divine substance which nourishes all life, a life-giving drink.

Aquarius also connects to the myth of Prometheus who stole fire to give to mankind and was punished by the gods. He displays the rebel aspect of Aquarius.

Aquarians are the idealists seeking the best for humanity and have an ability to remain detached and see life from a higher perspective. They search for universal truth, are highly original, are progressive and willing to experiment. They have a keen intellect, are faithful and loyal friends and are marvellous at doing a good turn. They have a reforming spirit.

Their weakness is that they can be wilful and contrary, unpredictable and have fixed opinions. They can fail to understand why others are so emotional. They can get stuck in their heads and be over rational. 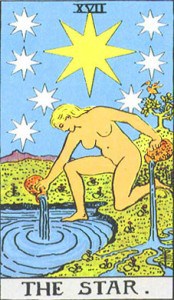 Affirmation: “I am a living breathing star radiating pure energies and giving sustenance to myself and others through the inspiration of my light” by Tad Mann

Best Day of the Week: Saturday

Anatomy and physiology: calves and ankles, the circulatory system

The Genius, The Friend, The Ally, The Wise Fool, The Star, The Humanitarian, The Networker, The Eccentric

The Rebel, The Outsider, The Revolutionary

Find out more about yourself by ordering a personal birth chart >