The ‘stars’ are the planets Venus and Jupiter which will be visible with the Crescent Moon on February 16th-17th. The wish comes from the connection of the sign Aquarius with the tarot card The Star.

This new moon joins Chiron (The Wounded Healer) and Neptune (Mystic or Addict). These two energies can bring a crisis of healing, so pain might show up in your life over the next month. However the planets are indicating a spiritual awakening- the result being positive. (This is because the ruler of Aquarius is Uranus travelling through the sign of Pisces.)

Aquarius The Water Bearer
With 5 planets in Aquarius at this New Moon the heavens are really shouting a message. Aquarius is a fixed air sign and the energy is to stabilise and focus our minds. To do this is Mastery! Our minds are fickle with thousands of thoughts passing through each day. Most of them are repetitive and many are fear based and negative. Remember that we really do create our reality with our thoughts.

The pattern is release and letting go
There are two strong patterns at the New Moon called ‘yods’ or fingers of fate. Two planets (they are allies as are in compatible elements) make a quincunx (a difficult angle of 150 degrees) to a third planet.  Notice the green lines in the chart above.

“Key principle- moving into a new situation, change, release, letting go.
The quincunx causes change and separation in its mode as a traveller. It walks on stage and stops the play, changes the plot, or moves everybody to a new theatre. Change and separation can be expressed in many ways, starting with the ultimate separation of death, travelling, illness, moving house and home, or maybe just isolating yourself because you are studying. From changing an opinion to breaking up a relationship, the quincunx wants to move you into a new situation whether you are ready for it or not. Sometimes this is very stressful; at other times it may be joyful.”

Since 4 planets are involved in these two yods most of us will experience the letting go effect in our lives. Most involved are Aries and Scorpios as their ruling planets are toughing it out!

Pluto, Mars and Venus are in one pattern, Saturn, Mars and Venus in the other. Both involve Mars in Leo and Venus in Pisces. Willful ego-centric people may be in your life at this time (Mars). You may be burning the midnight oil working way beyond your limit (Pluto). Saturn is involved so there can be too much hard work and depression due to isolation and cutting off from love and relationships(Venus).

Give up the fight
Mars and Pluto are in a tense relationship. As Mars backs off it will return to this same place in early April. It created the same difficulty mid month in October 2009. Mars and Pluto can be very tough – even brutal. What happened in your life last Autumn? Now it’s time to resolve it. Who or what were you in a fight with? Time for letting go and forgiveness. Using this energy constructively can result in big success as Pluto has an ally in Jupiter. Be gentle with yourself. Plus the positive attributes of Leo and creativity is the answer. You may feel that your inner child needs some play time! Pisces is the sign of the artist and musician. Reach for music that lifts your soul. 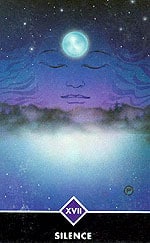 Clear the Mind Chatter
In the tarot the card for Aquarius is The Star. In my favourite deck by Osho it is called Silence (picture right).  How comfortable are you with silence? Are you OK on your own but find it difficult to be quiet with others. How often is our conversation just mindless chatter?

One exercise that really helps to clear and focus the mind is to write Morning Pages as described by Julia Cameron in her book ‘The Artist’s Way’. Morning pages are three pages of writing (long hand) anything that comes to your head. It’s like a shower for your heart and mind. I have done this before and it proved very rewarding.

The point to Morning Pages is to clear all the mind of its chatter – the stuff that runs around in your head out of control. The words you write may not be full sentences. What you write doesn’t have to make sense to anyone else – or even to yourself a few days later.  I do practise what I preach and started this today. It was much more fun than I remembered!

Get out of your Mind and into your Body
An easy form of exercise I learned recently is a Shaking Meditation! All you do is close your eyes stand on the spot and shake your body. Focus on the feet and work your way up. If you feel giddy just open your eyes. This reminds me of dancing in a very crowded night club! The music that makes this really easy is Kundalini Meditation CD by Deuter to buy from Amazon.

A Glimpse at the First Quarter Moon in Gemini
As we move into the First Quarter Moon on February 22nd the Moon will be in the mutable sign of Gemini, promising a flexibility of communication and choice which direction to take through the lunar month. The Moon will be in a positive aspect to Saturn so disciplining the mind and body will pay dividends.

Wish Upon a Star: Venus and Jupiter in Pisces
As I said above, in the tarot Aquarius is The Star. The three most beautiful and benefic planets (they look like stars but don’t twinkle!) can be seen close together in the sky over the next few days. Look to the west after sunset on February 16th/17th. You might be able to see her with the crescent Moon and Jupiter. Venus is now exalted in the sign of Pisces until 7th March. As Venus gains in visibility all things that relate to her will increase in strength. That’s all the good things in life- love, beauty, self worth, money! This bodes well for the world and for the feminine principle of receiving Grace.

On this blog website where I will keep you updated on the Monthly Lunar Journey.  I would really appreciate your comments and feed back! Please sign up as my vision is to reach out to the world and your support is invaluable.