This happens every year, however this year the two pair so close together they may appear as one.

“They will be so close together that it’s going to be quite a striking sight,” said Robin Scagell, vice-president of the Society for Popular Astronomy.

“Undoubtedly people could mistake them for a UFO, especially being so low down. They might appear to move around because of the distortion effect of the atmosphere.”

It will be the closest conjunction of Venus and Jupiter since 2000 but although the planets appear to be kissing-distance apart as seen from the Earth, they are separated by hundreds of millions of miles.

Venus and Jupiter pair up about once a year on average, but their conjunctions vary greatly in separation and visibility. Some are missed completely because they occur in daylight.

The next conjunction between the two planets is due to occur on 30 June next year, but will be less close.

During Monday’s conjunction, Venus will appear six times brighter than Jupiter even though its diameter is less than a tenth that of the larger planet, which measures 86,881 miles across.

That is because Venus is much closer to the Earth and also nearer the Sun, causing its clouds to be lit more intensely. 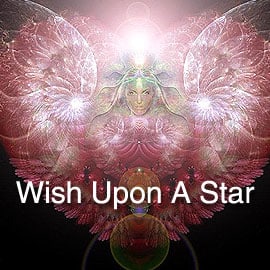 Wish Upon A Star

As Venus and Jupiter are the two benefic planets, it’s an extremely good day to ‘Wish upon a Star’- to ask for what you truly want in your life.

Then write it down. Our wishes are unable to manifest unless we put them into the world of form. Carry the list with you, or place it somewhere that you will be reminded.

Deepak Chopra calls this The Law of Intention and Desire. The ideal time to write your list would be after meditation. Once we have our list- I call it asking the angels what we want for Christmas- we can look at it before we go to sleep, and when we wake up.

I do practise this-albeit not to the letter- and it does work. Our minds are powerful, and I believe that we create our reality. This is a really powerful principle because it means if we don’t like our life we can change it.

Another opportunity to Wish Upon a star occurs on Saturday August 23rd when the Moon will join Jupiter at 14.46 BST. (This happens once a month, but  this time Venus will still be close by.)

The other major astrological event this week is the shift of the Sun from fiery Leo, into the earth sign of Virgo on Saturday at 5.45am. We will enter the dark side of the moon by then, a monthly cycle when we are meant to go within, to contemplate and meditate. More on this in next week’s video.

TIP: The energy of next week will start with the New Moon in Virgo, followed just hours later by Mars conjunct Saturn. Keep well rested over the Bank Holiday and build up your reserves of energy. Over doing it can really take its toll.