This Aquarius New Moon is the first New Moon of 2023 invoking the archetypal energies of  Aquarius The Rebel/Inventor aligned with Pluto God of the Underworld/Unconscious and the Phoenix.

Aquarius speaks of the future and has ideals about how much better that future can be compared with the past. It values freedom above all else. Read my article on Aquarius

Its a very intense time as Pluto is involved.

Most of us have a planet in Scorpio and Pluto is the planet that co-rules Scorpio. It changes sign this year into Aquarius from March 23rd until June 11th. Then it will re-enter Aquarius in 2024 until January 2044. This is a transit that none of us has experienced in our lifetime.

Look at where this Aquarius New Moon is in your birth chart as that area of your life (the house)  will be activated.

It is however connected to the chart of the United States as they are having Pluto return at 27 degrees Capricorn.

The astrologer  Robert Hand describes Pluto as being similar to the Hindu god Shiva, the Creator and destroyer. When it enters a new sign it usually begins by breaking down a structure then creates a new one. Decay is followed by new life.

When it entered Capricorn in 2008 we saw the collapse of major banks worldwide- institutions-which are ruled by Saturn. In Aquarius it is co-ruled by Saturn and Uranus-the planet that represents revolution, liberty and change. Expect human rights to become a hot topic.

From the Astrology Reading Cards on Pluto:-

“In each of us there is an instinctive urge for survival-an impulse for life so strong it will transcend most devastating of setbacks and lift us upwards into magnificence. This impulse has such transformative energies it can take any situation, including an already good one and make it incredible productive. The part of you that is described by Pluto is now engaged, so you are given a powerful impetus for growth or rebirth.

Life is an evolutionary process and change is inevitable. The Pluto force ensures things grow into what they must become, for they cannot stay as they are.

This may require an ending, but the ending always has a new beginning. This is the promise of life itself, but in order to make room we may have to let something go in order to gain something new.

You may be in a period of immense change and transformation, but sacred, creative forces seek to awaken you to higher consciousness and enlightenment. The only limit to what you can achieve will be your own imagination and confidence, so reach for the stars.” 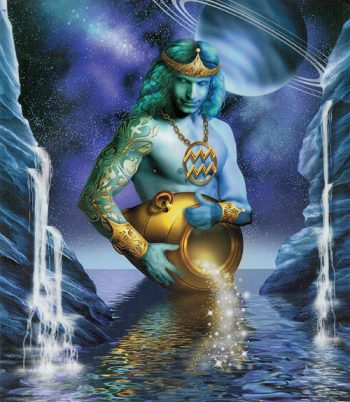 Aquarius is the constellation of the Water Bearer. Aquarian myths are concerned with great floods. The Greeks associated Aquarius with Ganymede, the beautiful Trojan boy who was the cup bearer of the Gods. In this cup was ambrosia which is the same word as the Sanskrit amrita, which is the nectar of immortality. So Aquarius is connected with the concept of a divine substance which nourishes all life, a life-giving drink.

Aquarius also connects to the myth of Prometheus who stole fire to give to mankind and was punished by the gods. He displays the rebel aspect of Aquarius.

Aquarians are the idealists seeking the best for humanity and have an ability to remain detached and see life from a higher perspective. They search for universal truth, are highly original, are progressive and willing to experiment. They have a keen intellect, are faithful and loyal friends and are marvellous at doing a good turn. They have a reforming spirit.

Their weakness is that they can be willful and contrary, unpredictable and have fixed opinions. They can fail to understand why others are so emotional. They can get stuck in their heads and be over rational.

Both Mercury and Mars are moving forward!

Mars the Warrior  went direct on January 12th.  That’s good news! To remind you, it went retrograde on October 30th.  With Mars in Gemini its almost impossible to get into a proper dialogue with those in power as the establishment (as seen by Saturn strong in Aquarius) refuses to budge. Mars will finally leave Gemini on March 25th 2023 when it moves into Cancer.

The other main news is that Mercury is now firmly moving forward in Capricorn.

It went retrograde on 29th December, so it stays in Capricorn until 11th February- a full 2 months. This is good news for all earth signs, Capricorn, Taurus and Virgo. Plus, the water signs, Scorpio, Pisces and Cancer can also benefit.

As Mercury is travelling through the best business sign of the zodiac- Capricorn -until February 11th, I suggest that you focus on organising, structure, testing and completing all unfinished projects. Now you can start to launch your plans.

There are 3 key dates when Mercury forms a positive aspect to Uranus. These were December 17th 2022,  then January 8th and the next will be on January 30th 2023.  Ideas can come out of the blue, so pay attention to all messages-via email, WhatsApp or Facebook. Or of course what you overhear or dream about. Ideal time for choosing tarot cards. I recommend The Inner Child Tarot by Lerner and Lerner, or Osho Zen along with Rider Waite.

Uranus goes direct on January 22nd, so from then on all planets will be moving forward until the next Mercury retrograde on April 21st.

Please watch my YouTube video above as I explain more fully about this Aquarius New Moon. 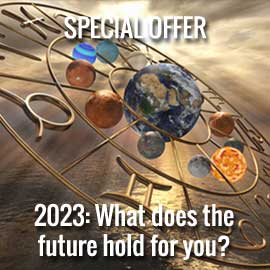 It’s a far better cosmic picture than the last 2 years, there are some big astrological opportunities this year. Want divine guidance on when they happen, and what they mean for you?

The astrology of 2023 is an important year as finally the tense relationship of Saturn in Aquarius to Uranus in Taurus is over. The fixed signs of the zodiac-Taurus, Leo, Scorpio and Aquarius can finally breathe a sigh of relief!

The nodal axis changes sign in 2023 into Aries North Node and Libra South Node. We need to re-evaluate our relationships to find balance. This axis focuses us on Mars and Venus, the lovers. Control results in power struggles and fights.

Venus -planet of love and money will go retrograde this year. It enters Leo on  5th June, goes retrograde on 23 July and finally leaves Leo on 9th October. It will change from an Evening Star to a Morning Star.

Mars -the planet of courage and the Warrior energises 7 signs, from Gemini to Sagittarius.  Once it goes direct in Gemini on January 12th we get the go ahead. By 25th March it will finally leave Gemini where it has been for over 6 months.

Jupiter -the planet of Great Good Fortune moves quickly through Aries then into Taurus on 16th May. This is a feel good factor, especially for all 3 fire signs, Aries, Leo and Sagittarius. Then earth signs, Taurus, Virgo and Capricorn will benefit.

Saturn begins a whole new journey in Pisces. In 2023 it will sextile (a positive aspect) Jupiter in Taurus in June 2023. Look back to 1994-if you can remember-when it was last in Pisces.

Uranus continues in Taurus. Neptune remains in Pisces. Pluto in Capricorn, then briefly in Aquarius. All three go retrograde every year and can indicate life changing events if they activate a natal planet in your chart.

Your 3 Personal Astrology Reports for 2023

The 3 Personal Astrology 2023 Reports are worth £45 if bought separately. These reports are based on your date, time and place of birth.
NB. They are both calculated for the same person.

The first report called ‘Sky Log‘ gives you over 80 pages of in-depth predictions for the coming year. This report is based on your transits and secondary progressions. The author Steven Forrest, has a great style and explains clearly and poetically – with no jargon – what the planetary transits signify for you.

This report is based on your transits and secondary progressions for the year ahead. There are two parts to the report:-

THE INVITATION: First, the big questions. In the part of the report called THE INVITATION, he gives you that “mountain-top” perspective that enables you to make sense of the details. Steven speaks in normal english- no jargon – and gives a real depth of understanding to the major planets affecting you in the year ahead.

This amazing 80 plus page report is easy to understand and very detailed. Sent as 2 reports for 6 months each.

The third report written by Stephanie Johnson is approx. 20 pages and includes a full colour birth chart and easy bar graph reference for the year. See above for an example. The entries are sorted by the exact date on which each event occurs, with the planets involved.  She writes:-

“When meteorologists forecast the weather we understand that they are not telling us how to live our lives. Rather they are giving us information that may help us make our own decisions. As far as the weather is concerned our major decisions are whether or not to dress warmly or to take an umbrella.

The astrological system of transits is offering us much the same information. It is giving us an indication of the emotional and intellectual weather of our lives. It is up to us to decide our own destiny.”