The most important aspect at this Full Moon is that the Sun is opposite Jupiter, King of the Gods. Jupiter is where we find faith in life. It offers hope and optimism.

However it has a shadow and that is religious extremism. Of being right. This is demonstrated by the swift takeover of Afghanistan by the Taliban. All counties have birth charts, Afghanistan has Mars opposite Uranus- an indication of extreme and sudden violence. (17th July 1973)

This full moon on August 22nd ends the month of the Sun in Leo, the most creative of the signs and the Hero archetype.

The occurrence of two full moons in the same sign happens once every three years as one zodiac sign gets a double-dose of lunar energy (a gift each sign receives about once every 36 years).

At this August Full Moon the air sign of Aquarius gets the gift. Aquarius is the Water Bearer, and the The Greeks associated Aquarius with Ganymede, the beautiful Trojan boy who was the cup bearer of the Gods. In this cup was ambrosia which is the same word as the Sanskrit amrita, which is the nectar of immortality.

So Aquarius is connected with the concept of a divine substance which nourishes all life, a life-giving drink. Aquarius also connects to the myth of Prometheus who stole fire to give to mankind and was punished by the gods, thus he displays the rebel aspect of Aquarius.

Leo is the sign of the heart and the individual- Aquarius is where we collaborate with others.

The main star in Leo is Regulus, in the heart of the lion. Regulus is a triple star flushed white and ultramarine. It’s one of the four royal stars of Persia, known as the Guardians or Watchers of the four directions.

Venus in Libra forms a positive flow to Saturn in Aquarius. This is a time for manifesting. The next most important date to have a ritual is September 10th when the Moon joins Venus in Libra. This activates the Throat chakra as shown in the Venus Shamanic Cycle. This year Venus is ascending as an Evening Star.

I have been researching a little-known aspect in astrology called the Quintile. It divides the circle by 5, and 5 is the number associated with the pentagram and with Venus.

I am holding a webinar in a couple of weeks exploring the Venus Shamanic Cycle and the Quintile. Master Astrologer Rick Levine says that the quintile is your charisma, your magic and your creativity. This Full Moon has an abundance of these aspects!

Spiritual Practise: Are you in need of protection?

Neptune is the planet that connects us to Heaven, to the Crown chakra and beyond. Mercury, Mars then finally the Sun will all aspect Neptune in opposition over the following days and weeks. (Sun opposition to Neptune is September 14th.)

Neptune is the highest vibration, the angelic, the Mystic. Neptune can be our biggest disappointment- the greatest heartbreak- or can lift us up to Heaven, where we remember Home and Oneness.

If, as a collective we join together, and we start to bless the situation we find ourselves in, to recognise that life is holographic, that each part contains the whole, and that our minds are all powerful, we can change the future.

The Spiritual Path with Caroline Myss

I have followed Caroline Myss for years and had the honour of attending a workshop with her in London way back in 2016. I loved her honesty, her wisdom and her humour. Currently I am attending online classes with Robert Holden and Caroline exploring the Enneagram.

I was prompted to buy her book ‘Intimate Conversations with the Divine- Prayer, Guidance and Grace’.

I am opening the book at random and one prayer I offer you is concerning Protection. I read the Prayer called ‘Reflections on Evil’ a week ago as the Taliban took over Afghanistan. If you are an empath this news may have overwhelmed you with a sense of helplessness.

She writes that the grace of Protection is real, and it is essential.

I love this Prayer as it offers us each an individual solution. She first suggests that you picture yourself in a castle and think of grace as the power to haul up the drawbridge.

The light filled net is the perfect symbol for the Internet, and for the sign of Aquarius.

Its especially good to do it just before you go to sleep to ward off evil and negative thoughts.

Think of grace of protection as a type of light filled net that Heaven drops over you, repelling psychic free radicals-negative energy that inevitably inspires negative actions, channelling itself into collective negative acts of creation-from attaching to your energy field. The power of grace expresses itself in your life in ways seen and unseen.

Watch this video as Caroline shares how she had a revelation about having a Prayer Life. She’s a Sagittarian with the Moon in Gemini, a born Storyteller and Teacher. (born 2nd December 1952 at 8am Chicago).

Mercury, the planet of communication is now in the sign of  Virgo. At this Full Moon in Aquarius Mercury is making a positive aspect to Uranus. They are both in earth signs and Mercury rules Virgo. This only happens three times a year so is significant. As this can bring downloads, be conscious of your dream  world and messages you receive on the internet. Tarot cards are a great way to contact the subconscious. I use process cards by Chuck Spezzano with clients to reveal the heart of the problem.

This month we have Venus moving through her home sign of Libra offering peace and balance. Venus is the Goddess and is making a positive contact to Saturn. This only lasts a week so its a great time to make that Wish List.

Mars is now half way through the sign of Virgo along with Mercury and in a positive relationship with Uranus. Change is in the air.

It seems so strange to be in the world right now. We are all going through a collective rebirth. The Full Moon isn’t activating Neptune. However once the Sun changes into Virgo there will be oppositions to Neptune in the days ahead (see above).

At this Full Moon Uranus continues to make a negative contact to Saturn, which is on ongoing theme of the year.

Aries: The Warrior, Taurus: The Lover, Gemini: The Storyteller, Cancer: The Mother,
Leo: The Sovereign, Virgo: The Healer, Libra: The Lover, Scorpio: The Transformer,
Sagittarius: The Explorer, Capricorn: The Strategist, Aquarius: The Renegade and Pisces: The Dreamer.

22nd August Full Moon in Aquarius at 13.01 BST. Mercury trine Uranus. Sun moves into Virgo at 22.35 BST, the sign of the Craftsman and Healer

25th Mercury in Virgo opposite Neptune 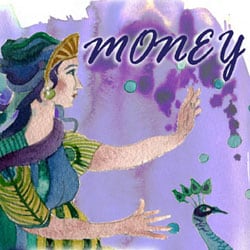 This unique and original Money Report highlights the riches inherent in your Birth Chart.

It has often been said that money does not bring happiness.

It can ease some hardships, but on its own money does not make a person happy. Neither does money make a person feel rich. One person can feel wealthy with very little money, while another feels poor with a great deal. Money worries do not seem to subside when more is accumulated; in fact they often increase.

The Money report has highlighted some of the indicators in your Horoscope that point to your inborn relationship with money.

“Money is not just a powerful symbol in culture but an important reality in everyday lives, as the Money, Finance and Business sections of daily newspapers attest.

This report has highlighted some of the indicators in your Horoscope that point to your instinctual relationship with money.

Sometimes the description might not match your experience or understanding, and sometimes contradictions can be read, but nonetheless the lessons are true. Reflecting upon the astrology will help you to become more aware of how money works in your life and how it is intimately bound up with your personal values. Money is not just a commodity, but is also a symbol of value and worth.

It is rare to meet someone who is indifferent to money. Money is a serious affair; it does matter. The word money finds its way into our modern language from the Latin word ‘moneta’ meaning mint. In the 3rd Century BCE the Romans established a mint at Juno Moneta’s temple, which lasted for the next four centuries. The image of the goddess appeared on one side of the coin holding the scales in one hand and the cornucopia in the other, symbols of weighing up and balancing the abundance that the goddess provided. Ironically money has its taproot in a deeper wellspring.

Gaining an understanding of money and its place in your life can greatly assist in helping you to accept your circumstances and live in an easier flow of life, and an easier relationship with money.” Stephanie Johnson & Brian Clark

This report has been aimed at helping you understand what role money plays in your life, what you truly value and in helping you focus on your soul’s purpose.

The report is about 20 pages and has been written by astrologers Brian Clark and Stephanie Johnson.

Your Money Report to buy

It will be emailed as a PDF. After paying you will be redirected to a page where you fill in your birth details.

(NB This report uses the western tropical zodiac.)
After payment you’ll be redirected to a Contact page where you enter your birth details – Date, place and time of birth.

Your information is entered by hand. Please allow 24 hours during the working week for your report to be delivered.