At this New Moon in Virgo we have an abundance of positive energy as all personal planets form trines-a flow of energy to the outer planets. This is really unusual.

Neptune is the only outer planet that doesn’t form trines. Instead it opposes the Sun and Moon.

Plus there are an abundance of Quintiles. These are creative magical aspects.

With trines its easy to fall into a sense of well-being and relaxing thereby not doing anything. Trines are passive. However as Mars joins the Sun and Moon and also opposes Neptune, my advise is to take action to make your dreams come true. See Pluto as your powerful ally.

This is the harvest time of year, when the crops are reaped.

Seeds are stored for planting in the Spring. This is a good metaphor for our lives.

As this chart has Mars allied with the Sun and Moon, goals set now can bear fruit, as long as you write them down on paper.

Virgo governs the intestines, which digests and breaks down things.

That’s the function of Virgo. It is service orientated and concerned with work.

Labels are part of Mercury’s function. Mercury is exalted in Virgo, and Virgo notices what is different, and what is out of place.

It is brilliant at organising and creating systems that make life easier.

Simply put if you want a job well done that involves detail, give it to a Virgo!

The shadow side of Virgo is:-

As Venus in Libra forms a positive flow to Jupiter in Aquarius, this is a time for manifesting. The next most important date to have a ritual is September 10th when the Moon joins Venus in Libra. This activates the Throat chakra as shown in the Venus Shamanic Cycle. This year Venus is ascending as an Evening Star.

I have been researching a little-known aspect in astrology called the Quintile. It divides the circle by 5, and 5 is the number associated with the pentagram and with Venus.

I am holding a MasterClass on Thursday September 9th exploring the Venus Shamanic Cycle and the Quintile. Master Astrologer Rick Levine says that the quintile is your charisma, your magic and your creativity. This New Moon has an abundance of these aspects!

This New Moon in Virgo sees Venus still moving through her home sign of Libra offering peace and balance. Venus is the Goddess and is making a positive contact to Jupiter. This is a great time to make that Wish List. On September 10th Venus moves into the seductive sign of Scorpio. Get out that black/red dress!

Mars is now two thirds through the sign of Virgo and in a positive relationship with Pluto. This combination gives the power of endurance to get things done as they are both in the practical earth signs. When Mars enters Libra it has to be diplomatic, which is contrary to its nature.

Now the Sun is in Virgo it will oppose Neptune on September 14th. This is a good day for meditation, for having an astrology or tarot reading, but not good to launch anything new. Also at the Full Moon on September 14th Neptune is really prominent.

At this New Moon the Sun and Moon trine Uranus so change can come gracefully, without resistance as long as there is no distraction from dreamy Neptune. 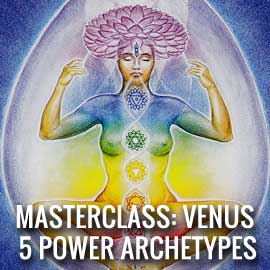 MasterClass: Shamanic Overtone of Venus-Exploring the 5 Archetypes of Feminine Power

When Venus is 10 degrees ahead of the Sun while still retrograde, it is rising as a Morning Star. This is called the heliacal rise and known as “The Shamanic Overtone.” This relates to the Myth of Inanna Queen of Heaven.

Venus rose as a Morning Star on June 10 2020 and began a new 19 month cycle, so we are currently in the Shamanic Overtone of Gemini, the Messenger, Writer, Magician and Storyteller.

When Venus is retrograde she starts a new cycle in only five signs of the Zodiac in a lifetime!

From 1966 through 2047 these are Aries The Warrioress; Scorpio The Sorceress; Gemini The Messenger; Capricorn The Matriarch; Leo The Queen changing to Virgo The Healer.

Join my MasterClass ‘Shamanic Overtone of Venus Exploring the 5 Archetypes of Feminine Power’ to find out more and discover:-

Which of these 5 Archetypes do you belong to?

Then sign up for my fully illustrated Masterclass on September 9th at 7.30pm BST. You get a personal Goddess Report worth £20 included.

Sign up to the MasterClass September 9th at 7.30 BST

After paying you will be redirected to a page where you fill in your birth details – Date, place and time of birth.

Your information is entered by hand. Please allow 24 hours during the working week for your report to be delivered.