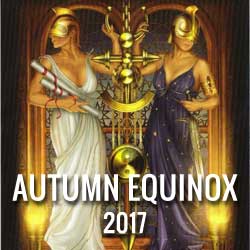 The date and time for this year’s Autumn Equinox is Friday September 22nd at 21.01.44 BST.

It marks a time of change, a turning point of the year as the Sun moves into Libra and we enter Autumn, or Fall as the Americans so aptly call it.

Libra is ruled by the planet Venus and this year falls in the sign of Virgo. Virgo is ruled by Mercury which is exalted, also in Virgo. So although we have the Sun in peace loving Libra, an air sign, we still have 3 planets- Venus, Mars and Mercury in the practical earth sign Virgo. Plus the Moon is in intense Scorpio.

The Autumn Equinox is an important chart that operates until the Winter Solstice in mundane astrology – which concerns governments and countries.

Libra is Justice in the Tarot

In the tarot Libra is the card called Justice, the balancing of the scales. This stunning illustration above is from the ‘Legacy of the Divine Tarot’ by Ciro Marchetti. I love the way the artist has used the twin Goddesses as the main image.

This is the theme of the Autumn Equinox involving the personal planets in Virgo, Libra and  Scorpio.

In the video I give an overview of the chart and the planets involved:-

Plus in the presentation I discuss the significance of Justice- the tarot card that rules Libra, the goddess Hestia that is connected to Virgo, and the throat chakra- the second power chakra- that is being activated.

I conclude the presentation with a guided visualisation with Hestia to find your inner ideal home.

The Equinox energy lasts over 3 days, so wait for Sunday before launching any new project.

The Mystery and Power of 12 Goddesses- Personal Astrology Report

Want to know what the Goddess Hestia means for you?

For the first time these 12 goddesses are revealed in this 45-page ground-breaking Goddess report helping you to discover your true potential. There are only 3 feminine planets- the Moon and Venus and now Ceres – and as every woman knows we are far more complex than that.

There are only 3 feminine planets- the Moon and Venus and now Ceres – and as every woman knows we are far more complex than that!