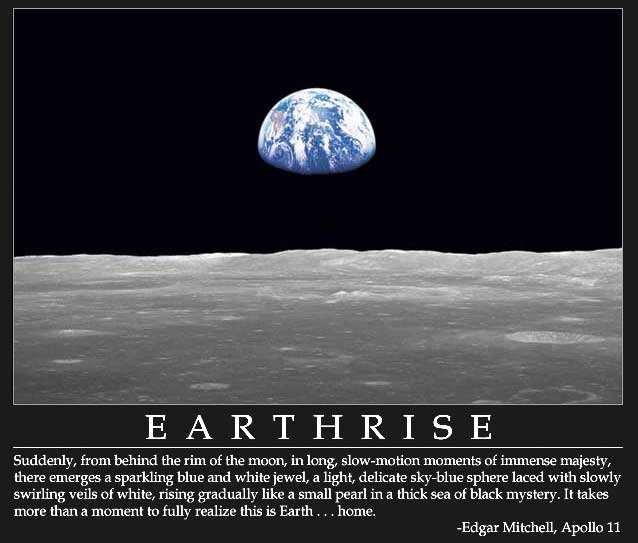 Neptune, the planet that connects us to Universal Love, went retrograde on June 12th 2015 at 9 degrees of Pisces. Neptune is where we feel the connection with others whom we might never meet, its the compassion that elevates us to the spiritual realms.

Oneness is  the realisation that we are all connected, that separation is an illusion. Its not something that can be easily described, it has to be experienced.

This video comes very close to giving  that experience.

Apollo 8 was on a mission to the Moon

On Christmas Eve December 1968 when Chiron was at 28 degrees of Pisces, astronauts on Apollo 8 showed us photographs of our planet for the first time.  They accidentally turned the camera towards earth. It was awesome.

At that time Neptune was at 27 degrees Scorpio forming a trine to Chiron, a flow of energy in the emotional water signs.

Chiron was at a right angle to the Galactic Centre, at approx. 26 degrees of Sagittarius. Any event that tunes into that area in the zodiac connects us to something far bigger than our Solar system. It opens up our awareness and expands our consciousness.

(This New Moon on June 16th 2015 is opposite the Galactic Centre, just as the UK is celebrating the anniversary of The Magna Carta.)

As the video says ” seen from the cosmic perspective, its spaceship Earth- we’re all here together.”

The gave us all on overview, and we saw our planet as One.

This was a breakthrough in consciousness.

Watch it, it’s a brilliant video.

I cried at the beauty that is our planet, our Home.

“Apollo 8 took three days to travel to the Moon. It orbited ten times over the course of 20 hours, during which the crew made a Christmas Eve television broadcast in which they read the first 10 verses from the Book of Genesis.

At the time, the broadcast was the most watched TV program ever. Apollo 8’s successful mission paved the way for Apollo 11 to fulfill U.S. President John F. Kennedy’s goal of landing a man on the Moon before the end of the 1960s.

The Apollo 8 astronauts returned to Earth on December 27, 1968, when their space craft splashed down in the Northern Pacific Ocean.”

Ed Mitchell- an astronaut who flew in Apollo 14- who is interviewed in this video, experienced an epiphany while coming back from the moon.

He co-founded The Institute for Noetic Sciences which synthesizes scientific and spiritual wisdom in 1973.
Astrologically flying and religion relate to Jupiter-the ability to see from a higher perspective and have hope and a new vision for the future. Jupiter on 24th December 1968 was conjunct Uranus in Libra-the breakthrough into new worlds. This week those two planets align in a trine in fire signs, Leo and Aries.

The epiphany of that time was expressed by Neptune. In 2012 Neptune moved into its own sign of Pisces- the last sign of the zodiac when we return to our Source, to Oneness.

Oneness- Grace can be experienced in many ways.

One of the most rewarding experiences of grace for me is on a healing workshop when the group are connected and bonded.

That’s when the angels sing!

This is the video to watch

2 thoughts on “Awakening to Oneness”