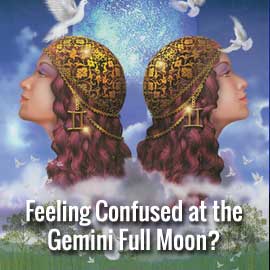 Full Moon in Gemini-Tension in the air

It’s the last Full Moon of the year and to put it mildly it’s complicated and confusing to comprehend what it means. Mercury is now in Sagittarius, a sign where it’s uncomfortable. Mercury likes detail, Sagittarius is the big picture. However Mercury rules students and in Sagittarius I would suggest those with the highest philosophical aspirations. The Election in the Uk could well rest with those students voting for the first time.

Jupiter rules the sign of Sagittarius but it’s now in Capricorn -a sign where it’s not comfortable.

Neptune-a planet that can obscure is at a right angle to this full moon in Gemini. All is not what it seems. Neptune rules illusion, scandal and confusion. It’s as if a fog has descended, blurring reality and at odds with the realistic practical Capricorn energy. The UK is a Capricorn country. However I believe that the power of prayer and compassion can change the energy. I have witnessed this in my Facebook feed.

The other problem at this Full Moon is that Venus (planet of love) is sandwiched between Saturn and Pluto. The 2 tough guys. Ouch!

The only good news is that Mars in now in its own sign of Scorpio.

Plus another positive factor is that Jupiter makes a great trine to Uranus. This can be the safety net. These 2 planets when combined promise a lucky break- the proverbial win on the lottery.

My Prediction at 6pm? A Hung Parliament.

The Sun is ruled by Jupiter so we need to look at what this planet is up to. See below.

Sun in Sagittarius until 22nd December at the Winter Solstice at 4.19am GMT when it moves into the earth sign of Capricorn.

Mercury is now direct in Sagittarius.

Venus is now in Capricorn. Venus will break free from the Capricorn stellium  on 20th December when it moves into Aquarius.

Mars is in its ‘home’ sign of Scorpio from 19th November until 26th January 2020. Mars takes 2 years to travel around the zodiac. In Scorpio it has the courage to see beneath the surface and can delve deep into the unconscious to expose secrets and bust open taboos.

Jupiter in Capricorn for the next 12 months. Time to climb the mountain and make progress step by step. Think how the mountain goat is so agile as it climbs up and you get the idea.

Uranus in Taurus is now retrograde and forms an alliance with Jupiter. Make some practical changes in your life and throw out anything that doesn’t bring you joy!

Neptune in Pisces is now direct on 27th November. This favours all the water signs. Watch your visions and dreams, get creative and meditate. I love the meditations with Deepak Chopra as he uses simple sanskrit mantras. See Chopra Center Meditation I like ‘Desire and Destiny’ as its perfect for manifesting.

What does the future hold for you? Find out with this Very Special Offer: £30 for Personal Astrology Reports worth £45!

It’s a far better cosmic picture than 2019, there are some big astrological opportunities this year. Want divine guidance on when they happen, and what they mean for you?

The astrology of 2020 is an important year as Jupiter moves through Capricorn after a year in Sagittarius, and Saturn changes sign for approx three months into Aquarius after two and a half years in Capricorn. Plus the nodal axis changes sign in 2020 into Gemini North Node and Sagittarius South Node.

The nodal axis connects us to the eclipses which are a wild card in astrology. They last for eighteen months. As the south node in Capricorn was connected with Saturn retrograde in 2019 it has been difficult year to move ahead. There may have been a tendency to being caught up in past life and ancestral patterns of control and procrastination. This will change once the nodal axis changes sign on 5th June 2020.

Venus -planet of love and money is in Aquarius on 20th December 2019 and will be retrograde in 2020. Venus will spend 4 months in Gemini from 3rd April until 8th August 2020.

Mars -the planet of courage and the Warrioress goes retrograde this year in Aries.

Jupiter -the planet of Great Good Fortune from 3rd December 2019 moves into practical Capricorn. This is a year to take time to make steady progress in order to climb the mountain.

Saturn continues through the last 9 degrees of Capricorn. On 12th January 2020 it will join Pluto, a major event for the world. It changes sign into Aquarius on 22nd March 2020.

Uranus is in Taurus for the next 7 years from 6th March 2019. Neptune remains in Pisces. Pluto in Capricorn. All three go retrograde every year and can indicate life changing events if they activate a natal planet in your chart.

Your 3 Personal Astrology Reports for 2020

The 3 Personal Astrology 2020 Reports are worth £45 if bought separately. These reports are based on your date, time and place of birth.
NB. They are both calculated for the same person. Please note that Steven doesn’t include Chiron.

This report called ‘Sky Log‘ gives you over 80 pages of in-depth predictions for the coming year. This report is usually sold as a 6 month report for £15. This report is based on your transits and secondary progressions. The author Steven Forrest, has a great style and explains clearly and poetically – with no jargon – what the planetary transits signify for you.

This report is based on your transits and secondary progressions for the year ahead. There are three parts to the report:-

THE INVITATION: First, the big questions. In the part of the report called THE INVITATION, he gives you that “mountain-top” perspective that enables you to make sense of the details. Steven speaks in normal English- no jargon – and gives a real depth of understanding to the major planets affecting you in the year ahead.

THE DETAILS: These minor transits unfold quickly. It’s a rare week that doesn’t contain at least a few. A report that discussed them all in the kind of microscopic detail we’ve applied to the major events would be several inches thick. In order to cover the daily astrological kaleidoscope within the practical limitations of the space available, we’ve resorted to producing capsulized one-sentence nuggets that compress a lot of information into a few words. So, slow down, shift gears, and let them wash over you. Think of these images more as daily meditations than as the kind of full-blown explanations to which you’ve gotten accustomed in the previous sections of SKYLOG.

Steven writes:- Throughout the following text, I’ll be endeavoring to write in plain English, but if you’re unfamiliar with the jargon of astrology, you’ll encounter a few words that may require definition. A “transiting” planet, for example, refers to the actual, current position of that planet in the sky. Sometimes the transiting planets form critical geometric angles with the “natal”planets in the birthchart, triggering developmental questions in your life. These critical angles are called “aspects.”

The “progressed” planets function in much the same way as the transiting planets, but we approach them a little differently. They’re like a script that’s been built into your birthchart. Just as we know that an oak tree will emerge from an acorn and bring forth its leaves in season, similarly each person’s birthchart contains within it the seeds of certain predictable developmental stages. Progressions spell out those stages.

This amazing 80 plus page report is easy to understand and very detailed. It will be emailed to you in 2 batches of 6 months each, so its easier to digest.

The next report written by Stephanie Johnson is approx. 20 pages and includes a full colour birth chart and easy bar graph reference for the year. The entries are sorted by the exact date on which each event occurs, with the planets involved. She writes:-

“The astrological system of Transits is offering us much the same information as a weather forecast. It is giving us an indication of the emotional and intellectual weather of our lives. It is up to us to decide our own destiny.”