This New Moon is in Aquarius The Water Bearer

This New Moon is in Aquarius, an air sign, with the Sun and Moon  joining Saturn which tells us its time for commitment. In my training with Psychology of Vision the principle is to commit to the truth.

For instance, maybe you have a relationship with two potential lovers. Once you step forward and commit, your true lover will step up to join you. The other will disappear but there will be no hard feelings.

Commitment gets us through the dead zone, that part of our mind that needs healing from childhood patterns, burn out and the dreaded “Imposter Syndrome”. Saturn is the planet of hard work, however it’s also about Mastery. I offer coaching to heal family patterns and karmic stories brought in from other lifetimes or they may be ancestral that are holding you back right now.

At this New Moon Mercury retrograde joins Pluto, so secrets can come to the surface with the help of the media. Once direct on February 4th it will rejoin Pluto once again on February 11th. Watch the news!

On a personal level, retrogrades are times to reflect and edit, to go back over the past and correct our mistakes.

Courage is needed to make changes.

Mars changed sign on 24th January, into a sign of its exaltation. That means it can give of its best. Mars in Capricorn is focused and has a plan of action. It’s organised and authoritative. Its the Commander in Chief of the army. This is the ideal time of year to write down your goals and set intentions. It moves into Aquarius on 6th March.

However Pluto is still moving slowly through Capricorn. With Venus joining Pluto again on March 3rd issues around love, power and money will be in the news once more.

This quote is so relevant right now. When the Sun greets Saturn on February 4th along with Mercury turning direct make your wish list for the year ahead.

“Until one is committed, there is hesitancy, the chance to draw back. Concerning all acts of initiative (and creation), there is one elementary truth, the ignorance of which kills countless ideas and splendid plans: that the moment one definitely commits oneself, then Providence moves too. All sorts of things occur to help one that would never otherwise have occurred.

A whole stream of events issues from the decision, raising in one’s favour all manner of unforeseen incidents and meetings and material assistance, which no man could have dreamed would have come his way.  Whatever you can do, or dream you can do, begin it. Boldness has genius, power, and magic in it. Begin it now.” William Hutchinson Murray 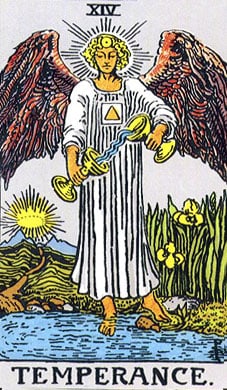 Aquarius is ruled by the planet Saturn in traditional astrology and Uranus in modern astrology. It’s represented in the tarot by Temperance.

Saturn demands simplicity, realism and truth wherever it touches our charts.

Saturn in its own sign of Aquarius is ‘strong’. It offers us a down-to-earth view of the world and being grounded. Aquarius connects to our networks, our community and groups of like-minded friends.

Venus and Mars join at the Full Moon on February 16th

This doesn’t happen every day so mark your calendar now. They join at 16 degrees Capricorn.

Sun into Pisces
The Sun changes sign and moves into Pisces on February 18th.

Mercury in Aquarius  Mercury will re-enter the sign of Aquarius -a sign connected with networks and community. Mercury stays in this sign until 10th March when it moves into Pisces. The main news is that it went retrograde on 14th January.  However it will go back into Capricorn on 26th January until 14th February. This is a time to complete unfinished business. Serious decisions may have to be made. Commit to the truth in your relationships.

Money
On 5th November 5th Venus moved into the serious sign Capricorn. Venus will now be in Capricorn until 5th March. It went retrograde on 19th December. It is now direct and will join Pluto on March 3rd.  This last happened on 11th and 25th December 2021.

Mars- The Warrior
Mars is now in Capricorn- its sign of exaltation until March 6th when in moves into Aquarius.

Jupiter: The Explorer/Teacher
Where Jupiter is placed in your chart is where you find your Faith. Jupiter is now in Pisces from December 29th. Water signs then benefit-Cancer, Scorpio and Pisces until May 10th 2022.  It then moves into Aries as it is moving really fast. It re-enters Pisces on October 29th until December 20th 2022.

Saturn: The Strategist/Authority
It is now in Aquarius, a sign it co-rules with Uranus. The theme of last year is Saturn in a tense relationship (a square) with Uranus. This is the old versus the new. Rebellion and protest marches were seen in the news on a daily basis. Which side are you on? Do you obey the rules? Or do you revolt? This last square is on December 24 but it is still ‘in orb’. Jupiter is now strong so can mitigate its effect.

Neptune: The Dreamer/Visionary
Mars is applying to Neptune making a square aspect on 11th January a day to be aware of  illusions and deception. Scandals  may surface in the news.

Uranus- The Renegade/Awakener is now direct
Uranus takes approx 7 years to go through a sign and always brings change/revolution. It is the planet that rules inventions and genius. Its now in Taurus (May 2018-April 2026 approx.) and we are witnessing the alarming news about climate change. Taurus is ruled by Venus, and as it’s an earth sign, we are now concerned with agriculture, our food chain and an awakening to our planet’s resources. In our daily lives Uranus wants to shake thing up. Cut out old wood.

Pluto-The Transformer/Regenerator
Pluto is the slowest moving planet and currently travelling through Capricorn from 2008 until 2024. It is the God of the Underworld and the unconscious. It is assigned to Scorpio who also have Mars as their ruler. The transit of Pluto in Capricorn calls for deconstruction of the establishment and institutions.