Raising Your Vibration at the New Moon in Leo

This new moon in Leo has the positive aspect from Jupiter in Aries, a fellow fire sign. Fire is enthusiastic and future orientated. Leo is born to shine, to be heart centered and is the best expression of the Sun’s energy. There is little energy of the element of air in the New Moon chart. That means that communications can be difficult as Mercury -the planet of communication -is in the water sign of Cancer. Logic is overwhelmed by emotion. Apart from Saturn in Aquarius, the first planet to move into an air sign will be Mars into Gemini on August 20th.

However this New Moon also sees the joining of Mars, the North Node and Uranus in Taurus. This is a volatile combination and extremely rare. Although Mars meets Uranus every 2 years, the last combination of these three energies in Taurus happened way back in 1855!

Mars and Uranus together demand that we keep grounded and be extra careful. Be aware of rushing. This is not a time for taking risks, especially crossing the road or driving too fast. On the positive Uranus is genius, so the aspect to Mercury at the New Moon is both a challenge and asking that we tune into our higher mind.

Train strikes have been called in the Uk, which maybe a blessing in disguise keeping people at home. As Mars joins the North Node change is in the air and a shift away from the stubborn fixed sign of Taurus, a letting go is called for.

However this conjunction can be destructive, so please don’t make any life changing decisions. Wait at least a week until the energy has passed.

I have a vast library of books but two I keep close are The Power of intention by Wayne Dyer and Ask and it is Given by Esther and Jerry Hicks-The Teachings of Abraham. I have also been reminded of the work of David R. Hawkings and his book POWER vs FORCE.

From the Internet: “There’s a magic to the higher levels of consciousness, that is seldom explained.”

Hawkins states that “… a single Avatar at a conscious level of 1000 can totally counterbalance the collective negativity of all mankind … 12 individuals at level 700 is equivalent to one Avatar at a consciousness level of 1000”. This is why taking responsibility for our personal level of consciousness and aligning with Source is so important … not only personally but collectively. This is why raising our vibration is the solution to the chaos, conflict and confusion in the human world.

For the last two years we have been struggling with the world-wide Covid pandemic. Now in the Uk and Europe we are facing an unprecedented rise in our energy bills. Added to our troubled times is the war in Ukraine. As a result we are bombarded with fear in the media. One solution is of course to turn off the news. However, in my opinion that doesn’t really help. It’s the ostrich approach!

“Our deepest fear is not that we are inadequate. Our deepest fear is that we are powerful beyond measure. It is our light, not our darkness that most frightens us. We ask ourselves, ‘Who am I to be brilliant, gorgeous, talented, fabulous?’ Actually, who are you not to be? You are a child of God. Your playing small does not serve the world. There is nothing enlightened about shrinking so that other people won’t feel insecure around you. We are all meant to shine, as children do. We were born to make manifest the glory of God that is within us. It’s not just in some of us; it’s in everyone. And as we let our own light shine, we unconsciously give other people permission to do the same. As we are liberated from our own fear, our presence automatically liberates others.”

As each of us raises our vibration we influence the collective. A daily spiritual practise of meditating, chanting a mantra, reading a book that inspires, keeping centred, being in nature, going for a walk, just cleaning the house, doing the washing up, tidying the garden all supports our wellbeing in small ways.

I have a booklet on The Bach Remedies and The Chakras by Philip Salmon and Anna Jeoffroy. The authors recommend Larch, Pine, Elm, Sweet Chestnut, Star of Bethlehem, Willow, Oak or Crab Apple to raise the vibration of despondency or despair to regain confidence and reconnect with the higher chakras.

Buy a book on the Bach Remedies for a clear explanation of each remedy. I have this book Bach Flower Therapy: The complete approach Paperback by Mechthild Scheffer available from Amazon.

Dr Wayne Dyer has a blog called Mastering the Art of Getting what you want.

Fear is at the heart of every problem. 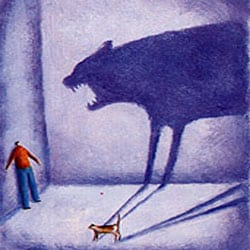 I would venture to suggest that fear is the biggest problem that the world- and business – is facing right now. Therefore busting through fear is essential.

When we are in fear we are off our centre and make poor decisions coming from survival.

We have lost our vision and our faith in a positive future.

Fear is a really negative emotion and is contagious. Have you ever been in a crowd when there is fear?

Fear is the work of the ego which can come up with thousands of good reasons to be fearful – fear of chronic pain, fear of death, fear of homelessness, fear of insanity, to name but a few.

Chuck Spezzano Phd has named over 40 fears, but some of the most surprising he discovered (in his 30 years of working with thousands of participants from all over the world) are the fears of greatness, happiness and of having it all.

This is an excerpt from my blog post on fear that I have republished with an exercise from Chuck Spezzano. Read in full:-  https://www.healingstars.com/healing-tools/busting-through-fear/

My personal breakthrough is learning to trust the situation regarding energy bills. To hand over my worry and fear into the hands of God. And to get creative. Watch this space!

There are now planets in earth signs at the New Moon in Leo. Mars entered Taurus on July 5th to give you the boost of energy that lasts up until 20th August when it enters Gemini. Pay attention on August 2nd when Mars joins Uranus, which is a time to stay grounded as this is a volatile combination. However its also a great day to be inspired as Uranus is the higher vibration of Mercury.

At this New Moon in Leo Venus is in the emotional sign of Cancer. The other planet in a water sign is Neptune and the South Node of the Moon in Scorpio. Issues concerning family and feelings come into our collective awareness.

The only planet in an air sign is Saturn in Aquarius. Saturn is now retrograde in the air sign of Aquarius and is still in a T square with the Nodal axis. Saturn can act in two ways, procrastination and depression, or once the past is healed and the burden lifted it becomes mature and is the planet of Mastery.

Fire Signs- Jupiter the King of the Gods in Aries

Fire signs bring warmth, enthusiasm and lifts us up. At the New Moon in Leo there is an abundance of planets in fire signs.  The Sun, Moon, Mercury are in Leo, Jupiter and Chiron in Aries.  Chiron trines Mercury so old wounds may come up for healing.

Jupiter: The Explorer/Teacher in Aries
Where Jupiter is placed in your chart is where you find your Faith. Jupiter is now in Aries from May 10th until it re-enters Pisces on October 29th until December 20th 2022. As Aries is the first fire sign it’s the Pioneer and activates all 3 fire signs:- Aries, Leo and Sagittarius. It goes retrograde on July 29th.

Saturn: The Strategist in Aquarius is now Retrograde
Saturn is now retrograde in Aquarius, a sign it co-rules with Uranus. The theme of last year is Saturn in a tense relationship (a square) with Uranus. This is now almost over, but not yet.

Instead we see Saturn creating a T square with the nodal axis. This is very karmic and letting go of the past is the key to work well with this energy, especially healing ancestral patterns. Saturn went retrograde on June 4th so this aspect has lessened but is still relevant.

Neptune: The Dreamer/Visionary in Pisces is now retrograde
Neptune is aligned with Pluto which is more about events in the world. This can bring up feelings of overwhelm and grief. Take my advise and check out the Flower Essence Report to help to balance your energies.

Uranus- The Renegade/Awakener in Taurus
Uranus takes approx 7 years to go through a sign and always brings change/revolution. It is the planet that rules inventions and genius. Its now in Taurus (May 2018-April 2026 approx.) and we are witnessing the alarming news about climate change. Taurus is ruled by Venus, and as it’s an earth sign, we are now concerned with agriculture, our food chain and an awakening to our planet’s resources. In our daily lives Uranus wants to shake thing up and cut out old wood.

Pluto-The Transformer/Regenerator in Capricorn
Pluto is the slowest moving planet and currently travelling through Capricorn from 2008 until 2024. It is the God of the Underworld, buried power and the unconscious. It is assigned to Scorpio who also have Mars as their ruler. The transit of Pluto in Capricorn calls for deconstruction of the establishment and institutions. It went retrograde on April 29th until October 9th.

I have some spaces for consultations in August, so please get in touch if you are having a difficult time right now. My sessions focus on healing and giving you an understanding and guidance for the next months ahead.

You have given me so much to think about, from discovering my rising sign (at last) to an introduction to Mayan astrology. It was a fantastic afternoon of discovery about myself and my roots and my potential. I am following up on the reading list (thank you so much for the suggestions – brilliant) and slowly coming to terms with my new persona. The sheer breadth of the reading was really eye-opening, as I thought I knew a fair amount about astrology but you opened new pathways for me. So I would warmly recommend a reading with Pam. Discovering so many unexpected links and connections has meant that many things are resonating and bells are still ringing!

“Thank you for the magnificently supportive, astounding reading today. It really makes a difference to have the Vedic perspective included. Your insights are brilliant, and the approach is stellar, and very helpful, with the balanced blend of psychology, astrology and intuitive card reading to expand and explore regions that the subconscious doesn’t bring forth easily.

Here’s a link to the page Houses in Astrology