Each month I absorb and integrate the astrological influences and reflect what I have experienced back to you.

This full moon has the new dwarf planet Ceres as a key player as Ceres is close to the Moon and opposite the Sun.

Retrograding back through the sign of Pisces, Ceres is also known as Demeter.  Demeter means da mater or “earth mother”.

I am quoting at length from the Chiron and Asteroid Goddesses Report I sell, which explains the relevance and meaning of Ceres:-

“Ceres is the expression of the Earth Goddess archetype that has been worshipped in many forms by various cultures. This archetype has always been associated with mother earth, harvests, a transformational journey to and from the underworld, rites of passage, and the birth or resurrection of a fertility deity.

The myth of Demeter (da mater or “earth mother”) and the sudden abduction of her dearly loved daughter Persephone by the lord of the underworld contains the same universal symbolism as other Earth Goddess myths.

These myths may appear, at first, to be early explanations for the changing of the seasons. They are actually wise, rich, symbolic teachings on such profound themes as loss and renewal, death and rebirth, and the endless transformation that constitutes the very laws of creation to which this universe and everything in it adheres.

On a more personal level, the Ceres myth deals with the severance of the bonds of love and attachment.

When we experience love as we have known it being taken from us, we can feel as if we have been cast into a realm of eternal darkness, never to return to the world of the living again.

We may then be unable to let go of the past, reliving it again and again in our minds – protesting and resisting the present, and demanding that it somehow hand over to us the treasure that has been snatched away.

Yet as with Demeter, who chose to forgo her divinity and wander in the world of humans, after which she was reunited annually with her transformed daughter, it is only when we can give up notions of eternal paradise and immortality that we can relinquish old attachments.

Only when we have been humbled by and have accepted those mysterious cyclic forces beyond ourselves that we can be restored to a state of plentitude and abundance in the here and now. Then we can truly understand how our cup must be emptied in order to be filled afresh.

Ceres in the birth chart thus describes what one really cares about, and the way one nurtures others (and needs to be nurtured oneself) in a parental kind of way.

It also indicates where one may tend to cling, the kind of separations that can be traumatic, and what one may be required to give up (or share with others) in order to grow.

It can also indicate the ways in which we seek for something that seems to be missing, something we didn’t get enough of, as well as the ways that can help us mourn such a loss.

As with Demeter and Persephone, Ceres can also indicate the kind of experience that constitutes a rite of passage – the most profound transformation: the death and rebirth of the self.”

I find this information deeply meaningful. A few years ago the picture of Persephone being reunited with her mother appeared on my computer screen when I returned from a workshop.

The last focus person was a woman, who was so much like my mother, who hugged me in her healing process.

I have Ceres in the sign of Scorpio, close to my Sun and my mother died in 2003. This process brought up deep feelings of being reunited with her after a long time in the ‘underworld’.

It also brought up the deepest feelings of forgiveness and of joy.

Workshops for me are the most profound places of soul healing.

I have had so many experiences of joy and bliss while attending and facilitating them, and am forever thankful to each and every person who joins me. We all are journeying together. 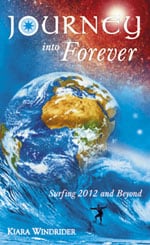 Yesterday I was in the company of 16 others and a remarkable man called Kiara Windrider.

I felt and saw the colours of the Goddess- deep blue and emerald green.

Whenever I am ‘lost’ I know that I need to reconnect with the Source and with nature.

His books and teachings are not for everyone, but for those of you who are on an evolutionary path I recommend him highly.

He describes 2012 and the Magnetic pole shift.  He says:-

“We live in a time of extraordinary change. Despite the environmental degradation, social chaos, religious bigotry, and politics of greed that have been plaguing this beautiful planet for much of human history, we are preparing for the greatest evolutionary leap in human history.

Mystics and even scientists from all over the world in different periods of time have referred to this period of transition, providing clues as to what we can expect and how we can prepare.”

I believe that preparation for this major transition has to be in the form of our personal healing. It is in this spirit that I invite you to attend one of my workshops, or book a session with me.

So many of us are going through such difficult times and we all need support and help – and I include myself in that!

An Invitation To Embrace Your Divine Feminine Power

We would love you to join us in this haven for soul healing, a magical and mystical place close to the Seven Sisters which connect us to the star group known as the Pleiades.

As facilitators, we know that when we are experiencing stress, exhaustion or over-giving in our lives, its vital that we take time out for retreat.

We know it’s impossible to pursue our dreams, heal ourselves, or create change when our energy is low.

Our relationships with family, friends and colleagues can suffer, and our creativity and businesses can dry up, if we are running on empty.

If this is how you’re feeling right now, then we warmly invite you to join us.

We have designed this retreat because there is a new feminine consciousness arising today, a force many are calling the Divine Feminine.

As women we need to take our place as leaders, to bring in the Divine and to hold the energy that is transforming the consciousness on our planet.

We promise you simple, yet powerful heartfelt rituals of letting go, time to spend in the beautiful and wild landscape, and time to enjoy being nurtured in the wonderful healing energy that is Florence House.

Do you love the 3 free Card Reading?

If so then you’ll love this course. Entitled ‘Change Your Mind, Change your World, its a Steps to Leadership Course.
It is based on the work of Chuck Spezzano and his therapeutic model called Psychology of Vision.

I have extensive knowledge and passion for this evolutionary spiritual model, which is based on A Course in Miracles.

In 10 modules spaced out over 3 months, this course will give you some practical tools for healing.

This course is ideal if you are a coach, a therapist, a healer, a teacher, or on a path of healing yourself and your core issues.

In light of the current economic climate, its priced at just £190- terrific value as it usually runs for £350.