Tonight is a SuperMoon Eclipse in Aries 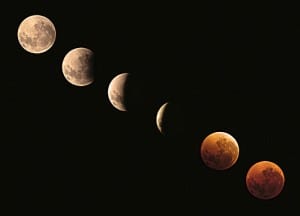 The much publicised Blood Moon is tonight at 3.47am BST. Its a supermoon eclipse because the moon is closest to the earth.

It’s a stunning sight because at a lunar eclipse the moon appears to turn red! If you’ve never seen a lunar eclipse its worth waking up for it-it lasts a long time compared to a solar eclipse.

The Moon in Aries is ruled by Mars, with the Sun in Libra ruled by Venus.

As Mars is with Jupiter in Virgo which can exaggerate it- watch out for petty disputes.

Venus in Leo can also be a prima donna! However Venus makes a trine to Uranus-creative genius.

This September full moon is also called a Blood Moon, because it presents the fourth and final eclipse of a lunar tetrad: four straight total eclipses of the moon, spaced at six lunar months (full moons) apart. Phew!”

One thought on “SuperMoon Eclipse”