Venus in Scorpio Diving Deep into The Underworld

With Pluto now direct and Venus about to go retrograde in Scorpio this Friday, the compelling testimony from both Professor Christine Blasey Ford and Judge Brett Kavanaugh has Washington holding its breath awaiting the outcome. Both testimonies were believable. However who is most likely to remember the event-the victim or the alleged perpetrator?

Millions of women in the US are outraged. Electing Judge Brett Kavanaugh to the Supreme Court means the balance of power at the highest level in the legal system goes to the right wing Republicans. This affects Women’s rights. Every judge is elected for life.

With Venus retrograding back to oppose Uranus expect a huge reaction from women in the US.

Venus entered Scorpio on September 9th and will go retrograde on October 5th. Venus stays in Scorpio until October 31st when it moves back into Libra. It returns into Scorpio on December 2nd and finally leaves on  January 7th 2019. That’s a long time in Scorpio.

A little known fact is that almost everyone born between 1954-1995 has a planet in Scorpio. That’s approx. 91% of the population, which is extraordinary. So this transit has a wide reaching impact.

There are many Sorceresses in mythology. Her abilities are her healing powers, her downfall can be jealousy and betrayal. One story from mythology that is highly relevant right now is Medea, the Sorceress who was betrayed by Jason. The astrological Goddess asteroid Medea is currently transiting Scorpio and joining Venus.

Medea is on familiar ground in the sign of Scorpio. As an archetypal impulse she represents the urge to engage in the mystery and magic of the unknown. One of the ways mystery engages us is through crisis, unexpected change or the release of powerful feelings. And mystery clothes herself in the guise of anonymity or enshrouds herself in secrecy and ambiguity. From The Goddess Report

Medea, a princess of Colchis, was known as the ‘wise one’ for her skill of healing and proficiency at using drugs and herbs.

Medea’s ancestors were linked to both the Sun and healing long before Apollo became the god associated with these realms. Helios, Medea’s grandfather, was the Sun god of the old order, born a Titan’s son. Her aunt Circe was a sorceress, a magician, herbalist and healer who knew the ancient ways of plants and spices and how to cast spells.

Circe had trained Medea as a young woman in the arts of sorcery, magic and herbalism, teaching her how to mix potions, direct spells and rearrange matter.

Medea was also a Priestess in the temple of Hecate, honoring the goddess of the dark night and magic.

Hecate guided her instincts. As a medical intuitive she knew the magical properties of herbs, the appropriate plants for healing, homeopathic tinctures and the process of preparing and administering these remedies in her caldron.

As the surrogate of Hecate Medea knew the timing of the lunar cycle and how to draw down the moon when ritual and ceremony was needed.

However, Medea was unable to withstand the unholy alliance of the goddesses Hera and Athena who petitioned Aphrodite to conspire with them and cause the princess to fall in love with Jason.

Medea became enchanted by Eros and fell in love with the Greek hero, who had come to Colchis to retrieve the Golden Fleece. Medea helped Jason achieve this impossible task with the help of special ointments, incantations and timing.

Medea enabled Jason, her heroic/lover, to succeed at the trials set before him but in helping Jason be successful Medea had to betray her family and flee her homeland.

I am facilitating a FREE MasterClass Venus in Scorpio: Awakening the Sorceress on ​Oct 9th at 7.30pm BST. 2.30pm EDT

Venus goes retrograde every 18 months in just 5 signs of the zodiac. This year its Scorpio. Scorpio is the sign that connects to Alchemy. Its the transformation of base matter into gold. This is the story of our spiritual and soul awakening. I’ts the Shaman.

It’s a deep process and needs us all to have the courage to confront our shadow. The most important being the darkest shadow of the unconscious -the shadow of The Betrayer. 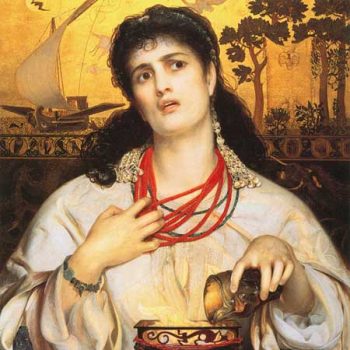 For the first time these 12 goddesses are revealed in this 45-page ground-breaking Goddess report helping you to discover your true potential. There are only 3 feminine planets- the Moon and Venus and now Ceres – and as every woman knows we are far more complex than that!

You can read about the fascinating mythology of these 12 Greco-Roman Asteroid Goddesses as well as the interpretations of each in the sign and house in your chart. It includes a full colour chart wheel. It is more like a book than a report as it is packed with information.

These twelve goddesses preside over the three spheres of Heaven, the Earth and the Underworld.

Goddess of the Underworld

The goddesses of the underworld are powerfully insightful and understand the deep waters of the unconscious, the complexity of feelings, the power of mystery and magic and the uncertainty of life. These goddesses may reveal themselves through a healing crisis, the psychic senses, loss, betrayal or a myriad of other mysteries that arise in our lives. Hygieia, Cassandra, Hecate and Medea are the four goddesses who plunge the depths of the unconscious realm.

Being Olympians the goddess Ceres (Demeter), Pallas Athena, Juno and Vesta (Hestia) are the goddesses of heaven who oversee the important initiations and transitions of the life cycle. These four goddesses were also the first named asteroids and the ones most frequently referred to in contemporary astrological literature. They personify four potent feminine functions or orientations to life.

Finally the goddesses who rule the Earth symbolize our worldly concerns and attitudes. Ariadne, Europa, Pandora and Mnemosyne are the influential representatives in the world who watch over our loves and labours, as well as our trials and triumphs.

I found the text incredibly evocative and really soulful. The text ‘cracked the code’ of an impossible client. I’d not used the asteroids with her chart before, and your text ‘solved a mystery’. Melanie Reinhart, Astrologer and author of Chiron

I have just read the Goddess report and found it beautifully written, lovely art work and a very perceptive summary. It brings out my main characteristics repeatedly, and that is impressive. Gillian Helfgott, International Astrologer and Author

I think it’s brilliant. It serves to take a chart reading to a much deeper level than the conventional delineation of planets. It confirmed things for me, that I know about myself, but couldn’t explain through planetary positions and aspects alone. Elizabeth MacGregor, Astrologer and Counsellor

Thank you so much for the Goddess report. My initial thoughts are “right up my spiritual alley!” I just LOVE anything to do with femininity and goddesses of course! Tracey Johnson, Naturopath and Dance Teacher

I liked the educational component of the Goddess Mythology sections. The report was also very accurate. It added to my understanding of my birth chart, giving it another layer of subtleties and interpretation. Peta Field, Achievement Consultant

I read the Goddess report. It is really, really fantastic. The info given on those women is great and the report has scarily accurate personal insights. Above all, it is truly uplifting and inspiring Marz, Tarot Reader

This report is a wonderful present for yourself, or the ideal gift for a very special friend. Discover what the story of Medea means for you.