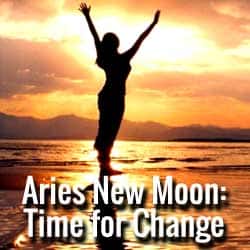 What is Sun in Aries activating for you? Its the first sign of the zodiac in the element of fire, so its the perfect time of the year to initiate something new. To be a pioneer.

The question I asked at the Spring Equinox is still relevant. What plans do you have to change your life? What inspires you?

Mercury joining Neptune
Mercury has just passed by Neptune for the third and final time on 2nd April. During March you may have felt washed out, moody and lacking energy, especially if you are a water sign- Cancer, Scorpio or Pisces. With Mercury still in Pisces and close to Neptune, this is the perfect time to meditate, to make a wish list, to make dreams come true.  Be still. Go within. Progress can be made after Mercury moves away from Neptune on April 12th/13th.

This New Moon is at odds with the combined energy of Saturn, Pluto and the South Node in Capricorn-a karmic combination. Old wounds from the past regarding authority figures may be coming up for you in you have planets around 20 -24 degrees Capricorn, Cancer, Aries or Libra. If so then the Karmic Insight Report would be a good starting point.

The Moon in Aries focuses us on ‘me’. On being bold and assertive. The ruler of the Sun and Moon is Mars, now in Gemini. This isn’t an especially good sign for Mars as its a mutable sign-meaning flexible. Mars prefers directness. Only after Mercury moves into Mars sign of Aries on 17th April will real progress be made. In the first 2 weeks its a period of dialogue as Mercury contacts Saturn on 7th (positive), Pluto on 10th (positive), Jupiter on 12th (negative). Jupiter want the truth, Mercury is neutral and wants the facts.

This is a major day in the month as Jupiter goes retrograde, Venus joins Neptune (heightened sensitivity), the Sun squares Saturn (negative and tough for leaders) and Mercury sextiles Pluto (positive for power discussions). It just happens to be an important day for the UK, as its the day when 28 EU leaders are holding a summit to decide whether they will agree to a further Brexit delay.

To discover more about the sign of Aries see this page.

Please watch my YouTube video for some enlightening insights into this Aries New Moon and feel free to share this newsletter with your friends.

The Karmic Insight report provides an in-depth look into the soul’s intentions and lessons to be learned in this lifetime.

Gina Ronco interprets the past life reverberations shown in the natal chart. The report clarifies lessons and goals recreated from the past for resolution in this life.
Saturn return is significant at ages 28-31 and 56-58
This succinct report concentrates on the planets that are most involved with karmic lessons.
• The Moon carries unresolved past-life issues
• The Sun represents the creative thrust of this life
• Saturn, sometimes referred to as the planet of karma, shows your energetic blockages, weaknesses and fears.
• It points to the areas of your life where the most concentrated effort and discipline will be required. If you do the work these will become your areas of greatest strength.
• The Karmic insight report also discusses struggles (major hard aspects) and gifts and strengths (major soft aspects) brought forward from past lives.
• If you are going through your Saturn return (age 28-31 years, or 55-58 years) then this report is especially useful. Every 7 years Saturn will be triggered, so key ages in your life are 7, 14, 21 and 28, then multiples of 7 thereafter.

After payment you’ll be redirected to a Contact page where you enter the birth details – Date, place and time of birth. Your information is entered by hand so will be delivered as quickly as possible. Please allow 24 hours during the week, more at weekends. The Report will be emailed to you as a PDF file.