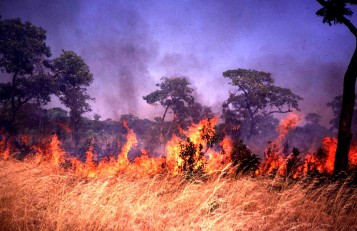 This is a story that my dear friend Andrew Wallas related on his website. It is well worth reading and passing on.

“Recently, my mother shared with me an astounding titbit she saw on National Geographic. Would you believe, she said, that the animals in Africa mostly likely to survive a fire are not the ones who run from it they are the ones who run through it? Those who run away get tired, collapse and are engulfed by the flames. Zebras, on the other hand, are especially great survivors because, rather than running away from the fire, they run through the fire. 

What a powerful analogy for the healing process, she continued. The fire is fear. If we run away from fear, we die. However, if we simply turn around, face it, and run through it, we survive. And discover that on the other side is simply scorched earth, fresh for rebirth. And the fire is no longer moving towards us but away from us, no longer a threat to our survival. Wow. Who would have thought that actually running through the source of one’s fear would be the way to survive and even thrive?

Diane Rehm (a radio show online at www.drshow.org) recently featured a gentleman who wrote a book called The Science of Fear: Why We Fear Things We Shouldn’t and Put Ourselves in Greater Danger. He comments on a phenomenon that occurred post-911:

A lot of Americans were afraid to fly. So we got into our cars and drove. But flying is far safer than driving. It’s so much safer that, even if there had been a wave of fatal terrorist hijackings, flying still would have been far, far, far safer than driving. Researchers found that the switch from flying to driving lasted for about one year. And during this time there was a spike in auto fatalities. The estimated number of Americans who were killed because of the irrational decision to drive rather than fly: 1,595. 3,000 people killed in New York, and 1,600 more killed on the road because of an unreasoned fear.