The intense configuration of the Sun conjunct Pluto at this Full moon in Cancer is in itself powerful.

Add into the equation the square to the Nodes of the Moon and it’s a full on karmic pattern.

Remember the story of the two wolves? It seems pertinent as we start the New Year.

An old Cherokee is teaching his grandson about life. “A fight is going on inside me,” he said to the boy.

“It is a terrible fight and it is between two wolves. One is evil – he is anger, envy, sorrow, regret, greed, arrogance, self-pity, guilt, resentment, inferiority, lies, false pride, superiority, and ego.” He continued, “The other is good – he is joy, peace, love, hope, serenity, humility, kindness, benevolence, empathy, generosity, truth, compassion, and faith. The same fight is going on inside you – and inside every other person, too.”

The grandson thought about it for a minute and then asked his grandfather, “Which wolf will win?”

The old Cherokee simply replied, “The one you feed.”

In the UK Prince Andrew’s friendship with a highly dubious character has led to a scandalous sex story in the front page of the national newspapers. These claims may or may not be true.

However when something of this nature occurrs in a famous person’s iife- especially a member of the Royal family- as an astrologer I ask what has led to this, and why now?

Prince Andrew was born with his Sun at exactly 0 degrees Pisces 0 mins, opposite Pluto at 5 degrees Virgo.

Pisces is a soft hearted sign known to be easily taken in by others, especially those with a hard luck story. He also has Chiron conjunct his Sun.

Both Neptune and Chiron have transited his Sun over the last 4 years.

Neptune is the God of the Sea, so things are not all that they first appear and is often involved when scandals occur.

Neptune is currently at 5 degrees Pisces, so is making an opposition to his Pluto. This is generational. If you were born between October 1959 and mid February 1960, August 1960, or April 1961-July 1961 you will also have Neptune transiting opposite natal Pluto.

However one big difference is that Prince Andrew also has Saturn at 14 degrees Capricorn, so the powerful transit of Uranus square to Pluto is activating the Lord of Karma.

Added to this Neptune was in Scorpio at his birth and the Prince also has his Moon in Scorpio. The Scorpio theme is further emphasised by his Sun is in the 8th house of his chart, Pluto’s natural house. His house of friendship is the sign of Gemini, with Mercury in Pisces in the 8th house. This adds emphasis to his lack of discrimination in his choice of his associates. With Jupiter in Sagittarius, there may be a tendency toward hubris-the feeling of being above the law..

Prince Andrew’s south node is at 26 degrees Pisces, with Jupiter square the nodes. This current story is without a doubt a karmic one, with past life and ancestral implications.

Letting go of the past, of clearing karmic debts, is a journey that is not undertaken easily. It is the Hero’s Journey, and it tends to be prompted by a crisis occurring.

In astrology Pluto is associated with the underworld, the realm of psychology, and taboos.

Pisces is ruled by Neptune, a planet associated with compassion and healing. This full moon indicates that can happen since Chiron is making favourable aspects to both Pluto the Sun, and the Moon.

I trained in Time Line Therapy way back in 1997 with the renowned NLP Master Trainer Arielle Essex. I have used in with clients ever since. An event in the past can be set off by an event in the present. Using astrology combined with an intuitive healing method I can help you identify the deeper cause of why your life can seem ‘fated’.

This is the year of the goddess. 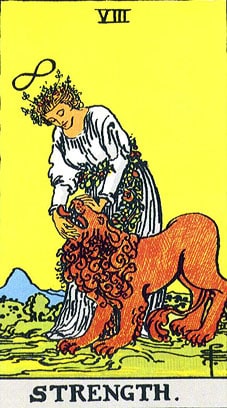 In numerology 2015 adds to 8 which is the Strength card in the tarot. Added to this Venus will go retrograde this year in Leo and Virgo, the signs of the King and the Goddess.

As Venus is now an Evening Star she is visible to us after the Sun sets.  She shines like a diamond in the sky:-

“It is during the first seven months of 2015 that Venus will perform like a sequined showgirl in the night sky, starring each evening in a brilliant evening performance.”

In my video above I discuss the 7 gates of Initiation that the Goddess Inanna goes through.

Please watch it to better understand the psychological and spiritual process that unfolds as Venus moves toward her next new cycle of Leo.

The goddess has always been dear to my heart and I passionately believe in feminine leadership, which is available to both men and women. it’s the natural ability we all have to receive Grace and the abundance from Heaven.

Over the next 7 months I will be looking at the charts of the 7 Gates of 2015 as Venus joins the moon each month.

The 1st Gate of Empowerment (starting with the root chakra) was on December 23rd 2014 at 15 degrees Capricorn. Just after the Full Moon on January 5th, the Sun will be on that same degree bringing the Light of Consciousness to the 1st Gate, the chakra of manifestation.

If you have delayed making any goals for the year ahead, then I suggest that January 5th/ 6th would be the ideal time to invoke the Goddess energy and commit yourself to some achievable goals for this month. Since January 2014 Venus has been focusing us on the sign of Capricorn in our charts. The Goddess in Capricorn loves work, she is the elder, the Wise One.

What would your Wise Woman wish for you?

Do you have a mentor in your life, a woman who you respect? What are the qualities you see in her? Those are your qualities too, because we can only see in others what is also in us.

The 2nd Gate of Creativity will be on January 22nd, a day after the Sun changes sign into Aquarius.